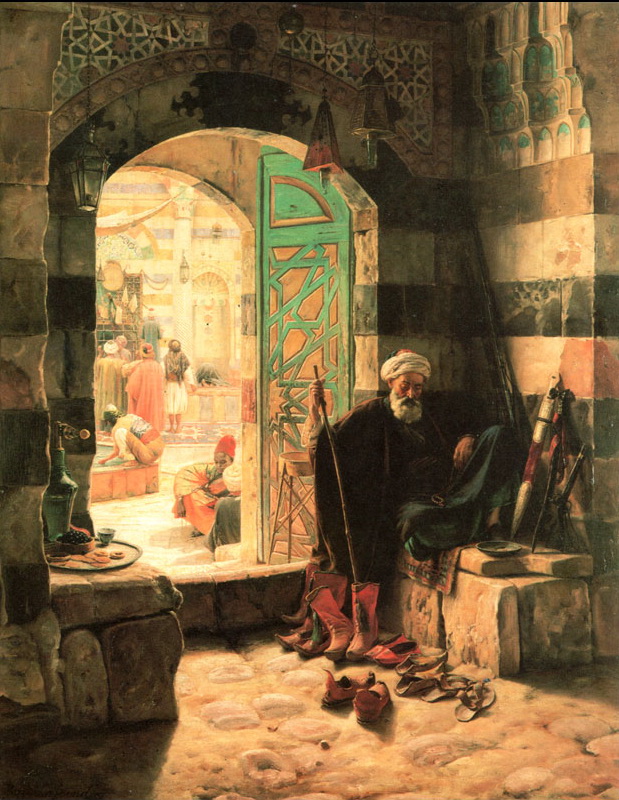 Warden of the Mosque, Damascus by Gustav Bauernfeind, 1891.

The 22nd summit of the Council of the Heads of State of the Shanghai Cooperation Organization (SCO) started on September 15 in Samarkand, the ancient city of Uzbekistan. The SCO summit will last two days, until September 16. Leaders of eight member-states are expected to attend the event: Russia, China, India, Pakistan, Kazakhstan, Kirgizstan, Tajikistan and Uzbekistan. Leaders of Belarus, Iran and Mongolia have arrived in Samarkand as observers. In addition, the president of Turkey, the president of Azerbaijan, the president of Turkmenistan and the prime minister of Armenia were invited to the summit as guests.

The leader of Armenia, Nikol Pashinyan, officially announced his refusal to participate in the summit. Otherwise, leaders of all countries, except India, arrived in Uzbekistan on September 15. Later that evening, Indian Prime Minister Narendra Modi posted on social networks that he was also flying to Samarkand.

Russian President Vladimir Putin arrived in Uzbekistan in the morning and had a very busy day. He met with the presidents of Kirgizstan, Turkmenistan, Iran, the prime minister of Pakistan, the chairman of China, the president of Mongolia and the president of Uzbekistan. In the evening, the heads of delegations participated in a tree-planting ceremony.

By this hour, the main event of the summit was a memorandum on Iran’s admission to the SCO. Representatives of the Iranian delegation in Samarkand pledged membership in the organization. If Iran fulfills its obligations, it will be able to take part in the 2023 SCO meeting in India as a full member of the organization. Thus, Iran will soon become the ninth member country of the SCO.

Vladimir Putin held a large meeting with Chinese President Xi Jinping, first bilaterally and then trilaterally with the Mongolian leader. “Attempts to create a unipolar world have recently taken an absolutely ugly shape and are absolutely unacceptable to the overwhelming number of states on the planet,” Putin said. According to him, Moscow and Beijing jointly stand for the establishment of a democratic and multipolar world order. Russia condemns US provocations around Taiwan and supports the principle of a unified China, Putin stressed.

Xi Jinping, for his part, said that “in the face of the colossal changes of our time on a global scale, unprecedented in history” China was ready to work with Russia to put the world on a path of sustainable and positive development. According to the Chinese leader, China is ready to support Russia on key issues for the two countries and appreciates the Kremlin’s position on Taiwan.

“Excellent,” was how Russian Foreign Minister Sergey Lavrov assessed the talks between Russia and China. He emphasized the businesslike and concrete nature of the meeting. It should be noted that Belarusian President Aleksandr Lukashenko, while meeting with Chinese leader Xi Jinping, wore a medical mask with a picture of the Chinese flag on it.

During a trilateral meeting with China’s president and Mongolia’s president, Putin suggested that the three states switch to payments in national currencies. “It is important to switch to national payment platforms wherever possible,” he stressed. According to him, Mongolia, China and Russia can thus secure themselves against political and other risks.

Moscow is considering the possibility of supplying gas to the Asian region. “Gazprom is in the process of completing a project for a gas pipeline to China via Mongolia,” Putin said. For his part, Mongolian President Ukhnaagiin Khurlsukh promised active support for the construction of the gas pipeline and expressed confidence in the success of this project. The protocol on the creation of the gas pipeline Union East from Russia to China via Mongolia with a length of 962 kilometers was signed by the parties in early 2022.

During his meeting with Pakistani Prime Minister Shehbaz Sharif, the Russian president did not rule out the possibility of supplying gas from Russia to Pakistan through the pipeline. Some of the infrastructure of the pipeline – through Russia, Kazakhstan and Uzbekistan – has already been built. “We need to solve the issue with Afghanistan,” Putin stressed. Perhaps the problem of political stability in Afghanistan could be solved by Pakistan, which has good neighborly relations with Afghanistan, Putin explained.

At his meeting with Iranian President Ebrahim Raisi, Putin fervently supported Iran’s accession to the SCO, saying that Russia would support this decision by all means. Putin noted that a large Russian delegation, including representatives of major companies, would visit Iran next week.

An important meeting with Turkish President Recep Tayyip Erdogan is scheduled for September 16. However, on the first day of the summit, Putin and Erdogan also found time for a brief conversation at a tree-planting ceremony in Samarkand.

Russia and Uzbekistan also signed a declaration on a comprehensive strategic partnership between the two states.

Results of the first day.

Iran’s accession to the organization, which took 17 years, is undoubtedly a remarkable event. And we can say with confidence that Iran will not only strengthen the Shanghai Cooperation Organization – its number will increase by 83 million people, and the total GDP will reach almost 30% of world GDP – but also will contribute to the development of the economy of the Islamic country.

The sanctions imposed on Iran will no longer be an insurmountable obstacle to trade; it will allow the country to do business with two-thirds of the world’s population. Iran can now supply members of the SCO not only with oil, but also with refined products, and the organization has new logistical opportunities.

Given the tense situation in Europe – the conflict in Ukraine, the economic confrontation between Russia and Western countries – the SCO summit itself is a major event for the Asian region, the entire Eurasian continent and the world as a whole. It is also worth noting the businesslike and friendly nature of the meeting if we compare the SCO summit with similar summits on the European continent. At the same time, the second day of the summit, which will be attended by the leader of India and for which negotiations with Turkey are scheduled, will be of great importance.