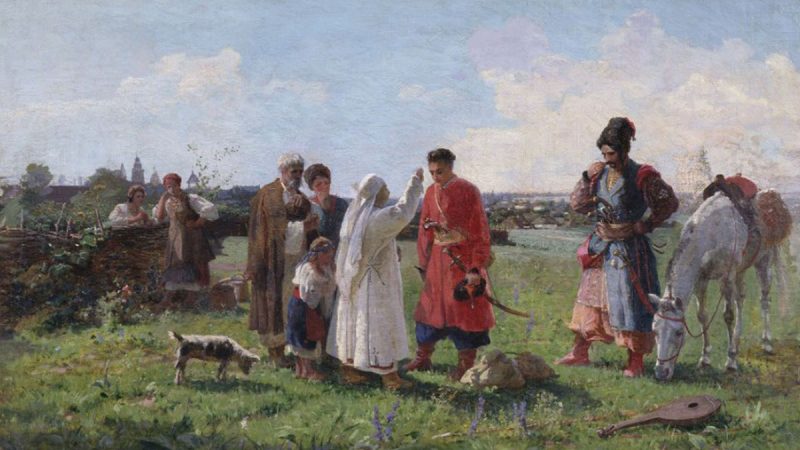 Seeing off to the Sech by Afanasius Slastion. Early 20th century.

The announcement by Ukrainian Defense Minister Aleksey Reznikov that the Ukrainian army is preparing a large-scale offensive on Kherson stirred up the public on both sides of the border. As recently as July 10, in an interview with the British newspaper The Times, Reznikov said that Ukraine was is massing a million-strong fighting force equipped with western weapons to recover its southern territory from Russia.

In doing so, he referred to Ukrainian President Vladimir Zelensky, who, as Supreme Commander-in-Chief, had allegedly already given the order to prepare for an offensive, and Reznikov had already begun to develop a plan of action. At first glance, this statement appears to be naïve, even on the verge of stupidity, or rather boastful, because no one in his right mind would warn the enemy about the offensive being prepared. All the more so the defense minister of the opposing side should not do this.

Did Reznikov lose vigilance because of the Western media’s attention to his person and said too much? After all, he also admitted significant losses among the Ukrainian soldiers during combat operations, without specifying, however, their number. On July 10, the minister gave two interviews to Western newspapers at once – one for The Times and another one for The Wall Street Journal, raising his information capitalization in the eyes of the Western elite. Moreover, these were his first interviews since the launch of the Russian special military operation, and he managed to commit such a slip-up!

It would seem to be no coincidence that the very next day, Zelensky first said that he had not read Reznikov’s interview. That is, he actually distanced himself from his statement. And then, a couple of days later, the Secretary of the National Security and Defense Council of Ukraine (SNBO) Aleksey Danilov corrected the Minister, saying that Zelensky set the task for the Ukrainian army to liberate the entire territory of Ukraine, not just the south, “It is not just about the Kherson region, but about the de-occupation of the entire country. And when the President sets a task for our military, he means all of Ukraine. Of course, we cannot liberate all the territories at once, but the Supreme Commander-in-Chief sets the task that all our territories be liberated. It is only a question of time and order,” Danilov said.

However, Reznikov did not reveal any secrets: the Ukrainian army has been making unsuccessful attempts to retake at least small villages on the Kherson-Nikolaev direction for several months now to present the public and Western curators with the correct information picture “We are already winning.” The Ukrainian media do their best to assure the public that the victorious march of the Ukrainian army, armed with advanced US and European weapons, will begin any day now, and it marches as far as to Moscow. But the forces here are clearly unequal, and the Ukrainian army suffers defeat time after time, and the necessary picture does emerge at all.

Then why did Reznikov say what he said? The fact is that the main and only issue of concern to the current Ukrainian leadership is the preservation and consolidation of their personal power within the existing system. And since it is not professional politicians and administrators who are in power in Kiev, but professional PR specialists and masters of information warfare, their statements should be viewed from this perspective.

Judge for yourself: Ukraine suffers one military defeat after another. Russian troops are slowly but surely advancing westward, liberating one area after another. At the same time, the Ukrainian economy is collapsing, and the supplies of heavy Western weaponry are unable to reverse the general course of the special operation, although their usage sometimes annoys our troops. Ukrainian society is quickly growing tired and frustrated: the “victory” promised by Zelensky and Co. is not coming, and this public discontent must be channeled in some way, or Zelensky and Co. will be deprived of power. This means that someone must become the scapegoat, and the best way out of the situation is to attribute all the failures to the country’s military leadership so that Zelensky and his team can stay in power.

It is known that in recent months, the conflict between President Vladimir Zelensky and Valery Zaluzhny, the Commander-in-Chief of the Ukrainian army (who, by the way, has been declared a war criminal in Russia), has escalated. In particular, the experienced military man Zaluzhny, with the support of the Pentagon, insisted that it was necessary to withdraw troops from Severodonetsk and Lisichansk to the fortified line Slavyansk-Kramatorsk-Druzhkovka-Konstantinovka quickly and in an organized manner, and to take defensive positions there, retaining soldiers. Zelensky, on the other hand, stuck to his guns on creating a picture of heroic resistance a la Azovstal, without regard to losses, saying that the flight of the Ukrainian army would cause a “domino effect” and the collapse of the information picture. And in order to hold the towns that were already impossible to hold, all the available reserves were thrown into the fight, including the special forces, which the Russian army methodically and melancholically destroyed.

Where it worked, Zaluzhny opposed Zelensky, but in general it was the president who made the decisions. As a result of these decisions, the Ukrainian army losses in this direction increased manifold, and Severodonetsk and Lisichansk were liberated several days later than they could have been.

The disagreement between Zelensky and Zaluzhny is further complicated by the fact that Zaluzhny’s rating and that of the army as a whole rose sharply amid the hostilities, while other politicians, except Zelensky himself, on the contrary, suffered a noticeable decline. Thus Zaluzhny has become a direct political competitor, which in case of early elections could even beat Zelensky, or at least make his life much more difficult. Despite the fact that no elections are expected in the near future, Zaluzhny as a politician is much more dangerous for the presidential office than Zaluzhny as chief of the General Staff. That is why the decision was made to get rid of the obstinate Commander-in-Chief.

From this point of view, Reznikov’s statement about the offensive in the Kherson region is a part of the game to neutralize Zaluzhny, in which the minister also has his own small benefit. According to informed sources in Ukrainian politics, Reznikov is aiming for the office of the Prime Minister of Ukraine instead of Denis Shmygal, and this informational “salvo” is aimed at raising his own political capitalization. Considering that Zelensky easily betrays his former friends, allies and partners, the likelihood that Shmygal will resign in the next few months is quite high. Someone has to answer not only for the devastation in the Ukrainian economy (this can still be written off to the war), but also for unpopular measures, such as an increase in prices for public utilities, which Ukrainians can expect this fall.

In fact, no one is going to punish Reznikov or send him to retirement for “disclosing” military plans. All the more so because on the same day, July 10, Deputy Prime Minister Irina Vereshchuk said that the Ukrainian army was preparing a counterattack in the south of Ukraine. According to her, the decision on the southern territories will be made “very quickly.“ “There will definitely be a counteroffensive,” the deputy prime minister said, repeating her appeal to residents of the Kherson region to leave the region if possible, including taking advantage of the opportunities offered by the Russian side.

The game of the Office of the President against Zaluzhny is that he is essentially put before two equally disastrous alternatives for him. If he, realizing that no counterattack on Kherson in the present circumstances is possible, refuses to give the order while trying to save his soldiers, he will be fired for insubordination, defamed as a coward, and his rating will collapse. Indeed, from the point of view of the media picture constructed by the office – Ukraine has a million-strong army, Western super-weapons – victory is almost guaranteed, and the Commander-in-Chief refuses to return our breadbasket [as the Kherson region is being called] and health resort [as Crimea is being referred]? A coward and a traitor, that’s what he is!

On the other hand, if Zaluzhny will obey, and the counter-offensive predictably fails, then again he is to blame – he could not cope, when everything was already ready! And if it not failed (let’s consider this option only theoretically), then all the laurels would go to Zelensky, Reznikov, and the others. Zaluzhny, however, will probably receive a medal.

Frankly speaking, it is not clear at all whether this million-strong Ukrainian army exists in reality, or it exists only on paper and in statements of Ukrainian politicians and mass media. After all, if this army really existed and was combat-ready, the Ukrainian military commissars would not be grabbing all the conscripted Ukrainian men, handing them summonses right on the streets, in nightclubs and even on beaches. That is why there is a suspicion that Mr. Reznikov deliberately deceives and either this army of millions does not exist yet, or this army is not absolutely Ukrainian, but partially formed from mercenaries and military contingent of NATO countries, such as Poland, for example.

Of course, there is also a possibility that this “golden” army is simply being saved for some very important battles, and now everyone who is considered of no value (and this is primarily residents of the eastern regions of the country) is thrown into the battle, just to gain time. But in any case, Zaluzhny knows the real state of affairs better than anyone.

And he has already made his move…