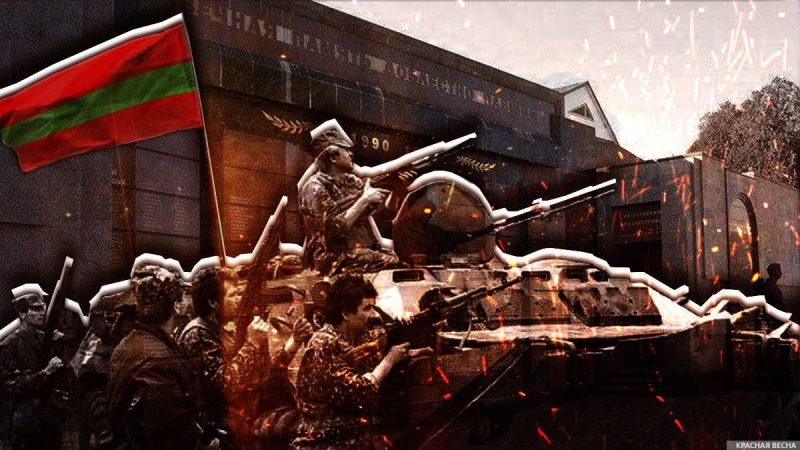 Clouds have gathered over Transnistria. Terrorist attacks have started to take place in the region, and Ukraine has already fired on the first shells at the Russian troops in Transnistria near the ammunition depots in Kolbasna, which they are guarding. In addition to armed provocations, Ukraine is waging a serious information war against the republic.

Ukrainian mass media and Telegram channels regularly broadcast information that the Russian military contingent in Transnistria is threatening Ukraine and that Ukrainian territory is being shelled from the republic. Hysteria is being whipped up, and Kiev is convincing Moldova of the need to strike Transnistria and resolve the problem in this region by force.

As for Moldova, it is hard to say that all is calm there. On the international level, official Kishinyov has adopted an anti-Russian agenda, and the internal policy of the country is also rapidly shifting to a radically anti-Russian direction, despite the fact that the authorities claim that the republic observes neutrality because it is not involved in the armed conflict. Moscow sees and understands that Moldova has joined the ranks of unfriendly countries, especially since Kishinyov has allowed the transit of oil products and other cargoes to Ukraine.

In Russia itself, not everyone understands the complexity and fragility of the situation in which Transnistria finds itself. Some experts, even on central TV channels, are far from demonstrating a vision of the picture. For example, in one program, a Russian expert began to threaten the Transnistrian authorities angrily for having dispersed an unsanctioned rally in support of the Russian special operation in Ukraine on March 6.

Note that the Transnistrian authorities did not use any force; they persuaded people to disperse. In addition, this event rises certain questions. It is true that people came to the rally in support of Russia in all sincerity. But first of all, the forces that were unfriendly to the republic had long been discussing how to arrange an orange revolution in Transnistria, and how to get people out on the street and confront the police. Secondly, this rally was gathered with the help of social networks and messengers by unnamed organizers. This means that no one was in charge of the event.

Thirdly, there are Ukrainian Nazis along the border of the republic, who are ready for any actions, bringing people out to mass events in support of a special operation – it could also be a provocation.

It is about seven kilometers from Tiraspol to the border with Ukraine. And knowing the experience of Donbass, it is easy to assume that every such rally gathered by unknown persons through social networks can turn into a tragedy: namely, a strike on a crowd or a terrorist attack. For example, on April 8, the Ukrainian army struck the train station in Kramatorsk, where people were being evacuated at the time.

The situation around Transnistria is very complicated. At any moment there could be a bloody provocation or a full-scale invasion of the territory of the republic. An attack by Moldova is unlikely, but Kiev, agonizing, is capable of many follies.

The fragility of the situation lies in the fact that any aggression by Ukraine against Transnistria not only automatically drags Moldova into the conflict, but also puts into question its territorial integrity. After all, Moldova considers Transnistria as its territory, so if Ukraine invades the Transnistrian Moldovan Republic, Kishinyov must respond. It cannot ignore the invasion.

And at this point, Moldova finds itself in a zugzwang: if Kishinyov supports military aggression against Transnistria, it automatically becomes a military opponent of Russia; if Kishinyov does not react in any way, does not stop Ukraine, it actually means recognition of Transnistrian independence. And if Kishinyov is categorically against military aggression from Ukraine, then Moldova must respond militarily to the invasion of its territory, otherwise Moldovan President Maia Sandu will lose politically and will lose power.

Moreover, some radical circles in Ukraine have long been talking about the need to return Transnistria to Ukraine as a historically Ukrainian land, which also threatens Moldova with the loss of territorial integrity. And there is also Romania, a NATO member country, which has territorial claims to Moldova, and which may not want to stay aside.

The increase in the degree of instability in Moldova can easily lead to a split of the country. This split will be closely related to the attitude toward the “St. George’s ribbon”, which was banned by the current government of Moldova, while the deputies of Gagauzia allowed it in their territorial unit.

Both sides of the banks of the Dnestr River are well aware that the configuration of the region may change, but they do not seek to organize this division by fire and sword.