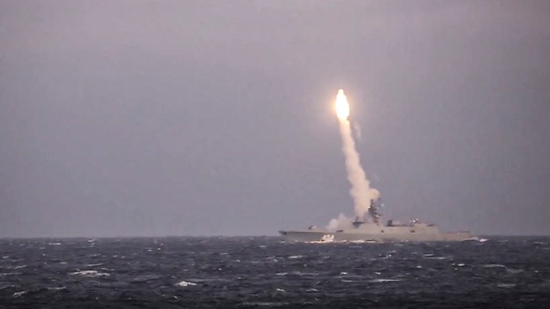 The frigate Admiral of the Fleet of the Soviet Union Gorshkov conducted a hypersonic missile exercise in the western Atlantic Ocean, the Department of Information and Mass Communications of the Russian Defense Ministry wrote on January 25 on the official website of the military department.

The crew of the frigate Admiral of the Fleet of the Soviet Union Gorshkov conducted a computer simulation exercise on using hypersonic missile weapons. The exercise involved a hypersonic Zirkon missile strike on a sea target simulating a simulated enemy ship at a distance of over 900 km.

During the training task, the servicemen demonstrated high coherence of action.

The voyage of the group of ships comprising the frigate Admiral of the Fleet of the Soviet Union Gorshkov and the medium-sized sea tanker Kama is led by the commander of the division of missile ships of the Northern Fleet, Captain of the First Rank, Oleg Gladkoy. In February 2023, it is planned to conduct a series of exercises off the coast of the Republic of South Africa together with the South African Navy and the People’s Liberation Army Navy of China.

The frigate Admiral of the Fleet of the Soviet Union Gorshkov is a modern multipurpose ship with guided missile weapons. The ship is designed to carry out tasks in the far seas and oceans.

The distinctive feature of the Zirkon hypersonic missiles is their ability to reliably penetrate modern and advanced air defense and missile defense systems. Armed with these missiles, the frigate is capable of delivering pinpoint strikes against any enemy targets both at sea and on land.