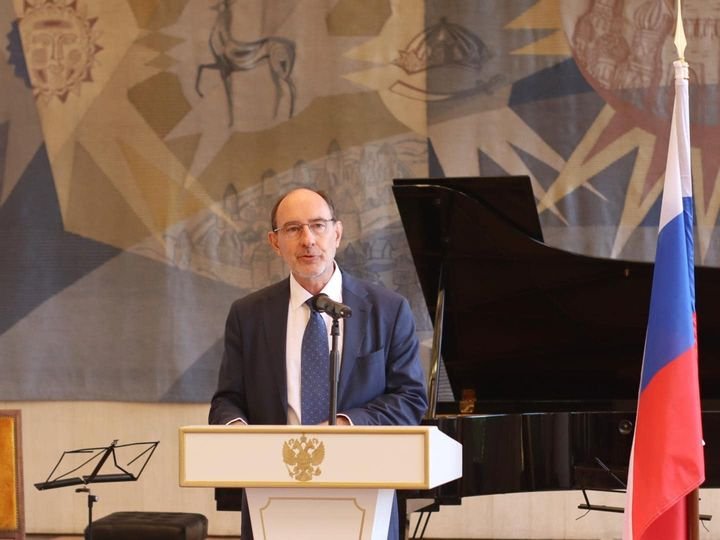 Pierre de Gaulle, the grandson of Charles de Gaulle, the first president of the French Fifth Republic, spoke on June 14 at a reception at the Embassy in Paris on the occasion of National Day of the Russian Federation. The speech resonated deeply with French civil society activists. This is a translation of the speech in English.

Good morning! On behalf of the French people, I extend a warm welcome to the Russian people, their government, and President Vladimir Putin (speaks in Russian).

On behalf of my family and my father, Admiral de Gaulle, I thank you for inviting me to celebrate your holiday, the National Day of Russia.

Our nations are bound together by years of friendship and the blood shed in the fight against fascism. This is an opportunity for me to remind you that French-Russian relations had a special meaning for General de Gaulle. France and Russia are linked not only by close relations, but also by the awareness of common interests and destinies.

Moreover, my grandfather thought of Russia as a distant ally that was essential for maintaining security, as a country that shared his concept of the European balance and had an important place in Europe and the world. As the general himself said, “Napoleon’s disastrous decision to attack Alexander I was the biggest mistake he made. Nothing compelled him to do so. It was contrary to our interests, our traditions, our genius. It was with Napoleon’s war against the Russians that the decline between us began.”

I have come here to say again, loud and clear, that it is in France’s interest to maintain good relations with Russia, and to say that we must work together to ensure unity and security on our continent, and balance, progress and peace all over the world.

Today, everyone understands the responsibility of the US for the current conflict, the detrimental role of NATO, an organization that is constantly expanding, and the reckless policies of the Ukrainian government. The Ukrainian leadership, fed by beautiful promises and fueled by US and European illusions, has pursued highly reprehensible policies against the Russian-speaking population of Donbass, multiplying acts of discrimination, looting, blockades, and bombing. In the West, unfortunately, they allowed Zelensky, his oligarchs, and neo-Nazi military groups to get involved in the spiral of war.

Yes, such blindness has serious consequences for the Ukrainian people. But let us make no mistake: what else do the Americans want, if not to provoke a new confrontation between East and West, whose core aim is to weaken and divide Europe in order to impose their directives, their economy and their system? Since World War I, the Americans have made a pact to establish the necessary balance of power in Europe and to get involved in the security of the European continent.

Organizing a systematic military escalation in Ukraine is hardly the way to prove their commitment and respect for their great principles of freedom and democracy!

The USA, as well as NATO, whose unbridled and reckless expansionism leads inexorably to an imbalance in the world and to injustice, are unjust. Fine US promises not to expand NATO eastward or northward have not been kept, nor have the Minsk agreements been fulfilled.

The reality is that the Americans and the West along with them did not understand that after the difficult transit of 1991 and the reconstruction that followed, Russia did not integrate into a unipolar world. Neither Americans nor Europe ever agreed that Russia should be transformed according to the Western model.

As a consequence, and from the beginning, President Putin was perceived as a dictator, but he is the great leader of his country!

In addition, the United States is unable to accept the loss of the dollar’s role as the predominant currency of international trade. Even worse, in their blindness in shifting their economic and financial interests to the East, they are only strengthening the position of China and the Chinese currency, which they are also seeking to combat!

Sanctions, which are the policies of the weak, are ineffective, capable only of weakening Europeans and other peoples of the world. That is why African states, represented by African Union President Macky Sall, are very concerned about this.

By provoking a deep, systemic and prolonged economic crisis that already affects all of us – from bread prices to bills for heating and energy – and because of the shortages of food, raw materials and industrial metals that it entails, the Americans are weakening the Europeans for their own benefit. Have we forgotten that for at least a century all major financial crises have come from the United States? “Our dollar is your problem,” Henry Kissinger said. Americans are still holding us with their debt, which they export.

Furthermore, by imposing a cultural and social model based on a cult of pleasure and consumption, Americans are undermining the foundation of our traditional values and the two pillars of civilization: family and tradition.

Europe, and certainly France, has much to lose by getting involved in this military and ideological escalation sought by the United States and NATO. Charles de Gaulle said, “America is not part of Europe. I think I have found it on the map.”

In the current situation, terrible and threatening, France can and must play an important role. France and Russia are the two daughters of Europe. France must not forget that it is the eldest among the European nations and that none of them has such a long path of glory, as France has. My grandfather always supported and defended the imperative need to build and maintain strong mutual relations with Russia even in the most difficult moments of history.

He loved Russia. So do we, my family and I, love Russia and its people. The Russian people, whose right to all kinds of property is so unjustly trampled everywhere in the world. It reminds me of the worst days of the occupation and the Vichy regime in France. And are Russian artists, and athletes to blame, too?

This systematic and indiscriminate policy of confiscation and discrimination against all Russian people is outrageous and greatly shocking to me.

Let me quote General de Gaulle again, “We in France have never considered Russia an enemy. I am for the development of Franco-Russian friendship and have never sent and will never send arms to people fighting against Soviet Russia.”

The Americans give money (and arms), we pay them with shares of our independence. I regret that the French government is committing itself to obey NATO and, therefore, US policy.

I regret that by the will of some French presidents, France has dissolved into NATO. But General de Gaulle has always sought to preserve France’s independence as part of NATO’s unified command.

NATO is absorbing Europe. Since then, the Americans have stopped talking to France and no longer consider us a strong and independent nation.

Is it worth recalling the recent insult to France caused by the gross and unilateral breach of a contract for the purchase of French submarines by Australia, a member of the Commonwealth, which was orchestrated by the British and Americans? Can France be satisfied, in addition to its loss of sovereignty, with the three-day reserve of ammunition and fuel that NATO grants it? I do not understand the policy of the French President.

Relying on his own convictions, his army, and the deterrent he had created to the dismay of the Americans, General de Gaulle was determined to leave NATO while remaining a full-fledged member of the Atlantic Alliance. I wish the French president had the same courage and the same will, rather than suffer the agony of being a prisoner of unanimity and a common policy imposed by the Americans, which make him dependent.

Similarly, I cannot recognize today’s France, in this “at the same time” policy that weakens us. I cannot accept today’s abandonment of our values, our history, our culture, our great principles of freedom, duty and security.

General de Gaulle wrote, “Between the greatness of France and the freedom of the world there is a pact for twenty centuries.” Our aim was and must remain the establishment of a European entente between the Atlantic to the Urals. In the midst of the global concerns and the dangers of the present crisis, France can and must once again use its influence and seek an agreement with the belligerent countries and especially with Russia.

One does not wage war alone!

I am convinced that ideologies and therefore the regimes that adhere to them in Ukraine, as elsewhere, are only temporary. “The only thing that matters is the reliance on political foundations, the ‘patina’ of centuries, and the ability of countries to maintain their greatness.”

As General de Gaulle said during his second visit to Russia in 1966, “The visit with which I have come to your country is a visit from the eternity of France to the eternity of Russia.”