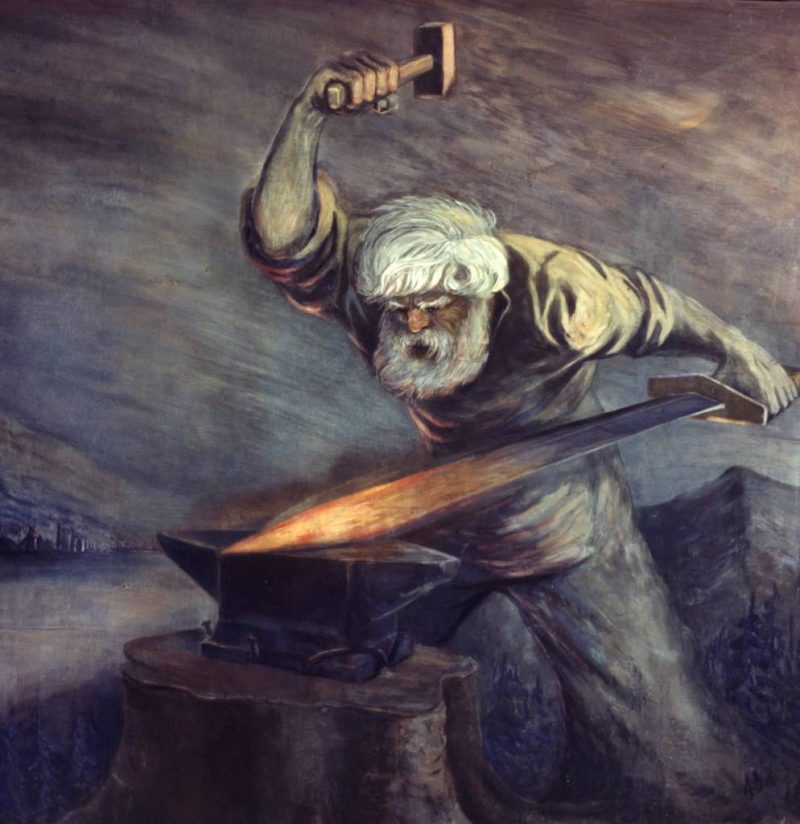 The Grey Urals are forging the Victory by Ivan Voskoboynikov, 1944.

We publish a summary of events concerning the situation around Ukraine as of 7 p.m., January 24.

A member of the Iranian Parliament says that the restriction of the traffic of European commercial ships through the Strait of Hormuz is on the agenda as countermeasures against the European Parliament’s anti-Iran measure.

The West is turning Estonia into an outpost against Russia, Russian Ambassador to the country Vladimir Lipayev said on the air of the TV channel Solovyov Live. He emphasized that the most advanced conventional weapons, capable of hitting St. Petersburg would be delivered to Estonia.

After the start of Russia’s special operation in Ukraine, Western companies announced that they were leaving Russia. Still, more than 91 percent of them ended up staying, the German magazine Manager Magazin wrote. Researchers from the Swiss University of St. Gallen (HSG) and the Swiss business school IMD claim that out of 1,404 companies based in the EU or G7 countries that had a total of 2,405 subsidiaries or active equity stakes in Russia before the Russian special operation in Ukraine, only 120 companies left the country within 9 months.

By 2030, Russia should have a satellite constellation of at least 1,000 satellites, Roskosmos General Director Yuriy Borisov said during the Korolev Readings in Moscow.

The idea of creating a single currency appeared in the organization BRICS, said Russian Foreign Minister Sergei Lavrov at a press conference. Lavrov noted that the West is ready to cheat at any moment for the sake of the current goal, so one cannot rely on its financial mechanisms. “Already the share of national currencies in payments between the BRICS countries is actively growing. Already in the BRICS countries initiatives are proclaimed on the need to work on the creation of their own currency as well,” stressed the head of the Russian Foreign Ministry.

Evo Morales called for the support of Latin American presidents who lead anti-American policies during the founding meeting of the coordination body of social movements in Latin America and the Caribbean, Telam news agency wrote.

The scandal that uncovered corruption in Kiev made it unacceptable to continue funding Zelensky’s government, president of the Patriots party Florian Philippot wrote on Twitter on January 24. “And this can happen all the way through 2023! This is unacceptable!” the politician resented.

The heads of three regions and parts of the Kherson and Zaporozhye regions that are under the control of the Kiev regime were replaced in Ukraine, Ukrainian President Vladimir Zelensky signed the resignations on January 24.

Zelensky commented on the statement of Belorussian President Aleksandr Lukashenko that Ukraine had offered Belorussia to conclude a non-aggression pact. “We are not going to attack Belarus and never have. There are no such intentions,” Zelensky said.

Pilot’s error in control caused the helicopter with the leadership of the Interior Ministry of Ukraine to crash in Brovary, the media reported, citing sources in the Ukrainian Interior Ministry.

The United States has reached certainty regarding the type of combat aircraft to be transferred to the Ukrainian armed units, Yuriy Ignat, spokesman of the Air Force Command of Ukraine, told reporters. According to Ignat, Ukrainian military pilots have already visited the USA for training.

Western countries and their supporters

The Baltic states will see a decline in GDP, Swedish bank Swedbank said in its economic review. Latvian and Lithuanian GDP will decline in 2023. The bank believes that economic decline awaits them.

Estonian President Alar Karis expressed his confidence in victory in case of war with Russia when he promoted Martin Herem to the rank of commander of the Defense Forces. The presidential office informed.

Azerbaijan plans to double gas supplies to the European Union until 2027, Hungarian Foreign Minister Peter Szijjártó said at a briefing on the results of talks with the head of the Ministry of Economy of Azerbaijan Mikail Jabbarov.

Belgium and Europe as a whole are at real risk of deindustrialization due to the sharp increase in energy prices in Europe and the protectionist legislation recently passed by the USA, said the CEO of the large Belgian construction company Etex, Bernard Delvaux – The Brussels Times.

Italy decided to strengthen its economic presence in the Balkans, Italian Prime Minister Giorgia Meloni said at a meeting with Italian ministers and entrepreneurs, N1 informed.

German Chancellor Olaf Scholz made a decision to send at least a company of Leopard 2 tanks to Kiev, Der Spiegel reported

German Chancellor Olaf Scholz made the announcement at a celebration of the anniversary of the founding of the German Chamber of Commerce and Industry DIHK, marking the launch of the largest industrial modernization project in Germany since the late 19th century. According to him, the project is unheard of. Scholz added that “in just under 22 years … a lot will have changed.”