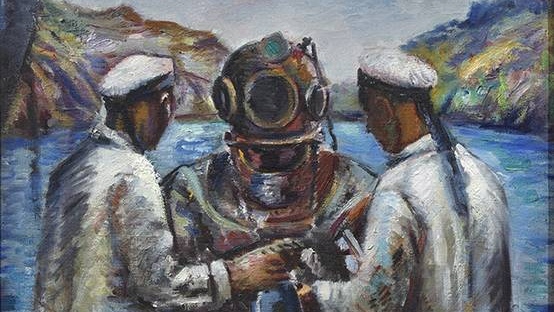 Sketch for the painting "Divers. EPRON" (fragment) by Konstantin Zefirov, 1932.

The failure of both Nord Streams gas pipelines is a major destabilizing factor that is blowing up the gas market throughout Eurasia, and this happens right on the eve of the winter cold.

On September 26, operators of all three active branches of the Nord Stream 2 and Nord Stream pipelines reported about sharp pressure drop in the pipes, which were filled with technical gas at the time of the accident.

The accident on three deep-lying pipelines endangered the entire current and future supply of natural gas to Europe, which was already in an energy crisis. Beyond that, there is a very reasonable question: How could this happen? And could it have happened without the help of a “secret well-wisher”?

Rossa Primavera News Agency summarizes the information about what is currently known, as well as what versions of the causes are being considered.

The fall of pressure in the Nord Stream 2 pipeline was reported on September 26, and in the evening of the same day, it became known about a sharp pressure drop in both branches of the Nord Stream pipeline.

The accident at Nord Stream 2 has allegedly occurred near the Danish island of Bornholm. The gas pipeline was laid near this island at a depth of about 100 meters. Local authorities reportedly reported a “potentially dangerous” gas leak for navigation and advised ships to avoid the area five nautical miles away (about 10 km). No other significant details of the incidents on September 26 were given.

Due to an accident at the Portovaya compressor station, both Nord Stream lines were also in maintenance mode, and no gas was pumped through them at the time of the accident. However, both branches of this pipeline, as well as one of the two branches of Nord Stream 2, were filled with pressurized technical gas.

It should be noted that amid the frozen commissioning of Nord Stream 2, as well as restrictions on gas transportation through Ukraine, Nord Stream is currently the pipeline for Russian gas supplies to Europe.

It is a sabotage

The German newspaper Tagesspiegel was one of the first in Europe to write about the causes of the accident at Nord Stream. It managed to interview several experts who told about the accident. For understandable reasons, it was not possible to quickly determine the extent and specific nature of the damage – the gas pipelines are at depth, but experts believe the main version is sabotage.

“We cannot imagine a scenario that is not a deliberate sabotage. Everything speaks against coincidence,” the newspaper quotes the interviewed experts as saying.

According to the newspaper’s authors, Ukraine or forces associated with it are most interested in sabotage. However, organizing and conducting such an operation is a non-trivial task. It requires special diving equipment and professional training, as well as a means of delivery of divers to the place of sabotage.

Nevertheless, the experts pointed out that they would consider other possible causes besides intentional damage to the pipelines.

Deputy head of the National Energy Security Fund of the Russian Federation Aleksey Grivach concurred with this opinion. He said in a commentary for RIA Novosti that the incident also most closely resembles sabotage.

“If the leak on one line could have been an accident or a result of a defect or unintended impact, the leak on three lines is evidently the result of someone’s bad will. Well, who struggles with Russian gas in Europe is not particularly secretive,” the expert stressed.

It should be noted that by a mysterious coincidence leaks in the pipeline Nord Stream, much of which passes through the territorial waters of Denmark, also happened near the Danish borders, but in international waters.

The press office of Nord Stream AG, the Nord Stream operator, has already said it is not possible at this time to estimate the time needed to restore the gas pipelines, but that the damage to the pipeline “is unprecedented.”

According to the already mentioned Aleksey Grivach, it may take several months to repair the damage as it will be necessary to dismantle the damaged section and replace it with a new one.

It should be emphasized that against the background of delays with the repair of Siemens gas turbines for the Portovaya compressor station, which arose through the fault of the EU, gas supplies to European consumers via Nord Stream have been significantly limited.

Despite the “triumphant speeches” of European politicians that the dependence on Russian gas is decreasing and that the gas storage facilities are fully filled, the position of many experts is far from being so optimistic.

“The region may import almost 40% more LNG during the coming winter than in the prior year,” Bloomberg reported.

However, it is noted that these supplies will go to the detriment of Asian countries. Europe will be able to meet its needs for electricity by importing 40 million tons of LNG, even if supplies from Russia will completely stop.

In this regard, the voices in Europe grew louder and louder about the need to put into operation Nord Stream 2, which has a capacity of one branch “A” (of two) of 27 billion cubic meters per year. Now Europe does not have this option, and the cold weather is getting closer.

Nevertheless, the German Ministry for Economic Affairs and Climate Action has already managed to tell Reuters that they do not expect “any impact on the supply” of energy in Germany. At the same time, no similar comments from representatives of the energy sector of the country have been received yet.

“Work is progressing so well that full capacity should be reached by the end of November this [2022] year,” Energinet, the press service of the Danish gas system, said.

Experts agree that supplies of liquefied natural gas (LNG) to Europe will not be able to replace pipeline gas from Russia in the foreseeable future, since there is not so much free LNG for sale in the world.

Thus, a complete cessation of gas supplies from Russia may be an attempt by some forces to force Europe to abandon Russian gas at any cost, blowing up the situation in the EU gas market. Even if the needs of the energy sector can be covered by LNG, as Bloomberg suggests, there are still needs of the industries themselves, as well as the household needs of the population.

On the other hand, China will not be able to switch the entire gas export of EU to itself right away because the analog of Nord Stream-2 in the Chinese direction (Power of Siberia 2) is only being designed. So Russia is also temporarily deprived of a significant part of its gas exports.

It means that for both Russia and the EU the importance of the Ukrainian gas transportation network increases dramatically. Whether there will be new negotiations between the EU, Russia and Ukraine in this regard is another question.

Be that as it may, the failure of both Nord Streams is a major destabilizing factor that is blowing up the entire Eurasian gas market, and right on the eve of the winter cold.