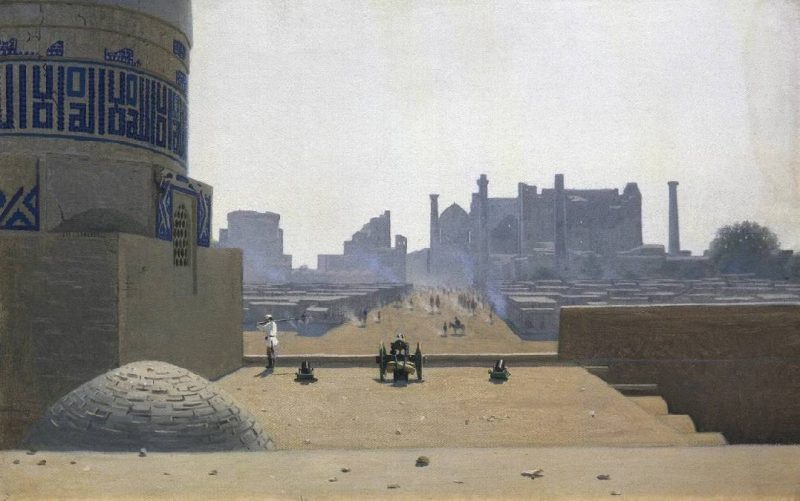 The Main street in Samarkand from the height of the Citadel in the early morning by Vasily Vereshchagin, 1869-1870.

The Shanghai Cooperation Organisation (SCO) is a very flexible organization in which there is no dominance and hegemony of any specific party. And this is very important.

At the same time, the common interests and the desire of all members and potential members of the SCO to be friends with Russia is still not something to talk about – Turkey supplies the Kiev regime with Bayraktar drones, Kazakhstan has joined the anti-Russian sanctions, and the event itself took place against the background of the worsening conflict on the Tajik-Kirgiz border.

Are Russia’s interests not threatened by its SCO partners? Is it possible for SCO structures to conflict with structures established within such organizations as the CSTO or the EAEU? And in general, what fate awaits the SCO in the 21st century? Bakhtiyor Ergashev, director of the Ma’no Center for Research Initiatives, answered Rossa Primavera News Agency‘s questions.

Rossa Primavera News Agency: What is the SCO? What are its peculiarities and differences from BRICS, CSTO (Collective Security Treaty Organization) and EAEU (Eurasian Economic Union)?

Bakhtiyor Ergashev: The Shanghai Cooperation Organization brings together countries of the Eurasian continent. This distinguishes it from, for example, the BRICS, which includes the countries of Africa and Latin America. The second key feature of the SCO is its multidimensionality. The organization is capable of addressing a very wide range of issues.

The SCO provides a platform for cooperation on a very wide range of issues, from security, fighting terrorism, extremism and separatism to, especially in recent years, the development of economic relations between member states.

The third feature of the organization that distinguishes it from the EAEU, CIS (Commonwealth of Independent States) or CSTO is that the SCO has two main leading countries – Russia and China. There is no predominant role of Russia in the SCO, as in most associations of post-Soviet states, Russia’s role is balanced by China. After the inclusion of India and Pakistan in the SCO in 2016, the balance has changed, taking into account India’s global interests. Pakistan is also a serious country – one of the largest Muslim countries with a population of over 200 million people.

Thus, the SCO is an organization that is not dominated by any country. There is, let’s say, the need to take into account the interests of the major global players in this organization and those countries that may have their own opinions within the SCO. For example, the Central Asian countries. That makes the SCO a very flexible organization in which there is no domination or hegemony by any one side. This is a very important feature.

Rossa Primavera News Agency: In the news about the forthcoming enlargement of the SCO we read about the competition between the SCO and the Eurasian Economic Union. Are there any contradictions or duplicated functions between these organizations?

Ergashev: I would not say that there is serious competition between the SCO and the EAEU. All organizations established in post-Soviet Eurasia overlap with each other to some extent. For example, we can always say that in some ways the EAEU competes with the CIS. There are certain spheres in the regulation of which both the EAEU member states and other countries that are not part of the EAEU but are members of the CIS take part. And so we can go through many organizations.

The EAEU is an organization that brings together post-Soviet countries, and in the EAEU the role of Russia is very strong, simply because of its economic power compared to other EAEU member states. In the SCO, in an economic sense, of course, China plays a much larger role. Its GDP exceeds Russia’s several times over.

I would not say that there is any competition between the EAEU and the SCO in the global sense. Although Russia and China now have a relationship of the strategic partnership with serious elements of the alliance, each of them has its own interests, and they pursue them through organizations such as the EAEU, the CSTO, or the SCO.

The SCO and the EAEU simply have different, mostly different tasks. Although in the SCO, as I have already said, the economic agenda is also becoming more and more obligatory and ever-expanding. But, in any case, the SCO is more focused on cooperation in the security sphere and on more global questions than the EAEU.

Rossa Primavera News Agency: During the January events in Kazakhstan, experts noted that the SCO could also work in the security sphere. That is, a certain duplication or conflict of functions of the SCO and the CSTO is possible. Can you comment on that?

Ergashev: I would probably agree with some of the experts who say that the CSTO and the SCO duplicate each other in matters of security cooperation and the fight against terrorist and extremist threats.

The CSTO is a politico-military organization. The SCO also began as an organization, the key focus of which was to fight the so-called three threats – terrorism, extremism and separatism.

But here we should talk about duplication but not about a conflict of organizations. A conflict arises when they confront each other, which is not the case here.

Rossa Primavera News Agency: What will change with Iran’s accession to the SCO? In terms of logistics (with the imposing of sanctions, new transport corridors are being actively considered), trade, food safety, military cooperation and geopolitics in general. It is clear that Iran has a stable anti-US position, as China and India do. In the end, is the SCO an anti-US bloc?

Ergashev: One can say that the process of expansion of an organization like the SCO is objective. Such expansion is necessary both for the members of the organization and for their neighbors.

It is hard to argue that any enlargement increases the potential of the organization to some extent, but at the same time there is a threat of complicating the mechanisms of coordination between the organization members, and the SCO may lose out in the speed of decision-making. All serious experts recognize this danger. When major powers such as India and Pakistan joined the SCO in 2016-2017, the issue of efficiency in coordinating the interests of SCO members came up directly.

Nevertheless, it is clear that expansion will proceed. Now we can already see that Iran is part of the organization. Turkey has expressed some serious interest in the SCO. If processes in Afghanistan develops positively, and serious changes take place there, then it is quite possible that Afghanistan may become an SCO member in the distant future.

As for Iran, it has more than 80 million people and a seriously diversified economy with breakthrough industries.

Few people know, but Iran is very successful in the development of biotechnology, nanotechnology, missile construction, both civilian and military. It goes without saying that Iran is one of the leaders in petrochemicals, gas chemistry, and oil and gas production. It is one of the biggest energy powers in the world, so it is a serious country with serious potential, and its presence in the SCO will strengthen the organization, enhance its potential and power.

The extent to which it will have an impact on the activity of the SCO itself and its structures is another matter. But if the SCO works after the huge expansion of 2016, I think Iran’s entry will not reduce the effectiveness of its structures.

As for the rise of anti-Americanism in the SCO, we cannot say that the SCO is a completely anti-American organization. Despite the fact that Russia and China have serious contradictions with the United States and the collective West in general, there are also India and Pakistan in the SCO, in which there are quite serious pro-American powers. This is the strength and weakness of the SCO.

However, despite this, I can agree that after February 24, 2022, when the global confrontation between the various blocs began to take clear shape, the SCO will play a very active role as an institution dominated by countries that are geopolitical and economic competitors of the United States in the world in the 21st century.