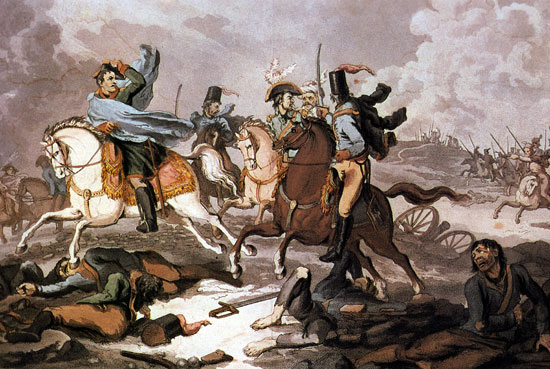 English gravure by J. Hassell based on original by J. Wright. Napoleon's panic escape after battle at Krasnoe. 1813.

The units of Igor Strelkov had no reason to leave Slavyansk in 2014, military correspondent Vyacheslav Yakovenko said on September 10 in an interview to Rossa Primavera News Agency.

“At that moment, there was no reason to leave Slavyansk. There were even no factors for that. The Ukrainian side was not on the offensive. Hostilities and shelling were ongoing there constantly, but there were no offensives at all,” Yakovenko said.

He said that immediately after Slavyansk was surrendered the Ukrainian side could make offensive operations, and this is what happened in 2014.

“We lost a great territory in just a few days,” the militiaman says.

Yakovenko previously said that Strelkov and the commander of the combat unit Aleksey Mozgovoy had enough arms to rebuff Ukrainian attacks. In 2014, Vyacheslav Yakovenko was in Lisichansk, where he commanded the Vostok-13 unit (Lugansk region was Ukraine’s thirteenth region).