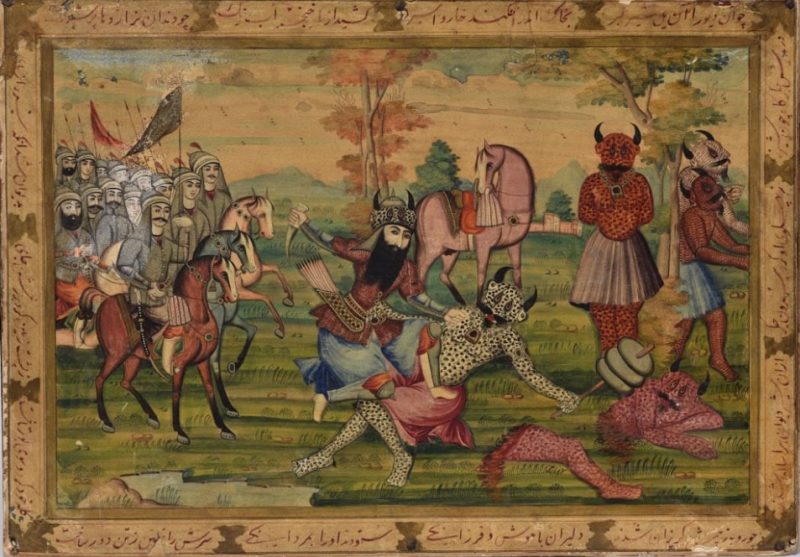 Battle of Rustam with the White Div, Iran, 19th century.

The start of Russia’s military special operation in Ukraine has affected processes around the world. In Transcaucasia, after the second war in Karabakh, when in September 2020, with the support of Turkey, Azerbaijan was able to militarily annex several districts of Nagorno-Karabakh, the situation is not fully defined. And it can be called very tense.

Events in Ukraine have raised the temperature even more and raised the stakes. The fact that Russia is being “constrained” by the situation in Ukraine additionally provokes the countries in the region to solve their geopolitical and economic problems.

Dissatisfied with the inconclusive outcome of the 44-day war, Azerbaijan wants all of Nagorno-Karabakh and for this purpose regularly carries out military provocations against Armenian soldiers and Russian peacekeepers, which coincides with Turkey’s plans to oust Russia from Transcaucasia.

And Russia’s participation in the special operation in Ukraine additionally gives the Turkish-Azerbaijani side the feeling that one of the main players is now busy and there is an opportunity to solve its tasks without fear of a response.

“We must take advantage of the right moment, and while Russia’s attention is focused on Ukraine, while it is in isolation, must secure our interests, restore sovereignty over our territories. If in a state of isolation Russia makes such statements, what will happen tomorrow if it stands on its own feet? Let it be the second front. Turkey is now on the side of Azerbaijan,” the chairman of the White Party of Azerbaijan Tural Abbasli said on Xural TV.

Azerbaijan’s policy of constant military pressure on the border with Armenia and Nagorno-Karabakh, as well as regular statements about territorial claims against Yerevan, has continued since the end of the second war in Karabakh and could not but cause a reaction from Iran.

On March 26, 2022, the cyber wing of Iran’s Islamic Revolutionary Guard Corps (IRGC) responded to an article in the Azerbaijani newspaper Yeni Musavat stating that Azerbaijan has the right to “return its lands” because Armenia is one of Azerbaijan’s historical lands expressed a clear attitude towards the situation in Nagorno-Karabakh.

“Any military invasion of Armenia will face the reaction of the Iranian armed forces. The Islamic Republic of Iran has repeatedly stated that it will not tolerate changes in the borders of neighboring countries,” the message reads.

A video of the message was later released, showing a speech by Iran’s spiritual leader Ayatollah Ali Khamenei. He said that international borders must be respected. Ballistic missile launches and IRGC exercises were also shown. And at the end of the video Nagorno-Karabakh was shown, highlighted in red against the background of the Armenian flag, and the inscription “red line” appeared.

It should be noted that Iran through various politicians, officials and high-ranking military officials has repeatedly warned Armenia’s neighbors against attempts to change the borders.

Thus, in November 2021 Iranian President Ibrahim Raisi said during a phone conversation with Russian President Vladimir Putin that any geopolitical changes or border changes in Transcaucasia were unacceptable for his country.

It is worth mentioning that in this case the issue is not so much about Iran’s desire to protect Armenia from its neighbors, but rather about its desire to protect its vital interests in the region. In case Azerbaijan and Turkey seize Armenia’s Syunik region militarily, Iran will be in fact cut off from the land route to Russia and Europe by the pro-Turkish “arc”.

The Russian special operation in Ukraine has served as a catalyst for another process related to the economy. The economic sanctions imposed on Russia, as well as the measures of the West aimed at blocking trade routes through which Russia used to transport goods before the special operation, create a new situation in the region. The competition for transport projects, which was previously waged by the region’s players, has intensified even more.

The competition between Turkey and Iran over who will be the transport hub of the region, and whose transport project will win, has intensified. Reports about the possibility of lifting the previously imposed restrictions on Iran increase the tension.

And on April 11, 2022 it became known that the railway authorities of Turkey, Azerbaijan, Georgia and Kazakhstan planned to establish a joint venture called Middle Corridor, aimed at improving services for the transportation of goods, including the route of China – Turkey.

The Middle Corridor is expected to connect with Iran’s North-South corridor via Caspian Sea ports, thereby “extending” it to Iran and Arab countries along the Persian Gulf, East Africa and India.

Turkey continues to strive to occupy the position of a regional “hub.” According to experts, such projects are, among other things, part of the country’s plan to build a unified Turkic space.

Also, experts note that in addition to the traditional participants in such a project, Kazakhstan has unexpectedly appeared, while Russia is not in this or a number of other similar projects.

“By the way, it is planned to register the company in 2023, the year of the centenary of the Republic of Turkey. It is symbolic. And it doesn’t look like a coincidence,” Turkologist Vladimir Avatkov wrote on his Telegram channel.

Despite the fact that Iran’s North-South transport project is a direct competitor to Turkey’s Middle Corridor project, Iran in economic matters began to actively cooperate with its Turkish ally, Azerbaijan. The new reality in the South Caucasus caused by the results of the second war in Karabakh, the special operation in Ukraine as well as the pro-Turkish stance of the Armenian leadership is in fact pushing Iran into the arms of Azerbaijan.

The fact that in the new reality Russia’s trade turnover with Iran and India will grow, which means that Azerbaijan’s status as a transit country will increase, adds more urgency and ambiguity to the situation.

Recently it became known about the new transport route, which will be a branch of the Iranian transport corridor “North-South”. It is planned to create new transport routes between the East Zangezur economic region of Azerbaijan and the Nakhchivan Autonomous Republic through the territory of Iran. These are new railway and automobile transport routes with Nakhichevan, as well as new power supply lines.

In fact, Iran is planning to create the analog of the so-called Zangezur corridor, linking Azerbaijan and the Nakhchivan Autonomous Republic, on its territory the creation of which Armenia actively opposed.

The parties, the Ambassador noted, are negotiating the joint development of oil deposits in the Caspian Sea. Iranian companies, he noted, have expressed their readiness to participate in the restoration of the territory of Nagorno Karabakh, which was ceded to Azerbaijan.

Besides, Iran and Azerbaijan agreed to continue the construction and operation of hydroelectric complexes and hydroelectric power stations “Khudafarin” and “Maiden Tower” on the Aras border river.

In a situation when new restrictions continue to be imposed on Russia, sanctions have not been lifted from Iran, and Armenia – an ally of both countries – is moving in a pro-Turkish vein, it is clear that Turkey and Azerbaijan will be the main beneficiaries of the situation in Transcaucasia. They can gain new markets, new transportation routes and new economic opportunities.

This is a translation of the article written by Aleskey Kulayev for Rossa Primavera News Agency.