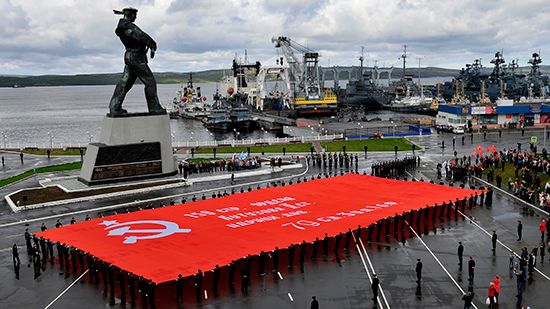 The largest copy of the Victory Banner given to the main base of the Northern Fleet
mil.ru

The State Duma Committee on Constitutional Legislation and State-Building by its decision of March 3 supported an amendment stating that the Russian Federation is the successor to the USSR.

The Committee also supported an amendment to protect the historic truth about the God.

According to the amendment, Russia “protects the historic truth,” “respects the memory of those who defended the Motherland,” and “any derogation of the people’s heroism in defending their motherland is intolerable.”

“The Russian Federation, united by its thousand year-long history, respecting the memory of its ancestors who gave us their ideals and their faith in the God as well as the continuity in the development of the Russian state, acknowledges the historically established unity of the state,” the amendments says.

As the successor to the USSR, a victorious power in World War Two, Russia became a permanent member of the UN Security Council, a member of the OSCE, and a recognized nuclear state; it also assumed the USSR debts and received the rights to the USSR assets abroad.

Previously, the Committee on Constitutional Legislation and State-Building proposed that the requirement not to have foreign citizenship should be extended to apply to the ombudsman and the prosecutors.