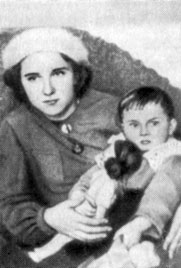 Tortures and prison did not break me. When they will lead me to the place of execution, I will go with my head held high and I will accept death with my eyes open…

You, my dear daughter, need to know what your mom went to die for, what numerous thousands of fighters went to die for. We defended the Soviet government and the ideals of the Communist party. This means that I am giving my life for you, for your future. And everybody does the same! We go to die for the bright future and the happiness of the young generation. I give my life, so that you, dear Romenochka, would never know the horrors of war and so that a black swastika would never cast a shadow over the joy of your youth…

I am currently in a prison cell, in which there is 12 of us, women of the Communist resistance. We find strength in the conviction that our struggle is just… We have all made the decision that we will be singing “Wide is my Motherland” en route to the place of execution. We all know this song well. Yes, our Motherland is beautiful! It is worth fighting for. And life is beautiful in our glorious Motherland. Most of us are still relatively young. Which is why it’s natural that we love life, but we sacrifice our flaming hearts, so that all of the working people of our precious Motherland were happy, the ones who will live after we go…

You will never find my grave, dear daughter. The executors throw their victims into one pit and even out the ground, so that no one would ever find it.

When I will be going in my last journey, I will tenderly caress you and kiss you one last time in my thoughts.

Study, Romenochka, like a young Communist ought to, and work like a real follower of Lenin, since only in labor for the good of the society does a person finds true happiness of life.

This letter was written in one of the prisons of Nazi-occupied Riga, Latvia. Olga Grenenberg was 29 years old at the time. Romena was only 4 years old when the war started. Olga and her husband went to the frontline. Olga became a nurse, but she also studied in a special school to become a trained resistance fighter behind enemy lines. In the autumn of 1941 she parachuted in Latvia. With the help of comrades she managed to earn the trust of Hitler’s Nazis and their local supporters and receive a job in the local drugstore.

For 900 days she risked her life, but supplied the Soviet forces with intel regarding the numbers of new Nazi divisions in the area, the attitudes of the locals and occupants, the facts of resistance and many other things. She organized the publication of anti-Nazi leaflets in Russian and Latvian. She helped the partisans in the forests to receive weapons and ammunition, she helped supply the fleeing prisoners of war with fail-proof ID documents. For nine hundred days of constant risk and heroism.

She was captured by Nazis in 1944. They tortured her, but she said nothing. When she found out that they plan to execute her, she wrote this letter to her daughter. She gave the letter to her aunt, who was held in the same prison. Olga was executed on the following day. 20 years later the letter reached Romena.