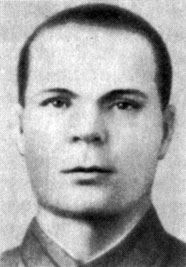 When you will be reading this letter, many years will pass, the war will come to an end, and joyous and happy life, just like the one that was before the war, will blossom in the liberated land. When you were very-very little, when you were lying in your cradle and smiled in your sleep, your mom and I thought that you are happy, that you won’t have to live through what I lived through in my childhood years. I thought I will give you a start in life and was happy with your first words, your first thoughts.

The days of the pestilent war had come, and you and mom were evacuated over the Volga, saved from death, from child killers, while I went to defend Motherland. You, probably, remember our last goodbye in March 1942 in somebody’s hut of Kaysatskaya village as if in a sleep. You waited for me for so long and never saw me again. I, just like hundreds, thousands of other fathers, died in the struggle against our mortal enemies – German fascists, who attacked our country, disrupted the peaceful life, brought us a lot of grief.

Know, my dear son, that my blood also showered the land, on which you can walk, build a happy life, of which I dreamed so much.

Years, decades will pass, the graves of our enemies will grow over with wild grass, thistle, while the free Motherland will build us, the defenders, a great monument of Victory. Look at it and remember me. Read this letter and ask your mom what you will not understand – she will tell you.

You move forward, fight for a better life, and if the enemy will threaten your beloved Motherland, be worthy of my, your own father. Don’t spare your life for your Homeland.

I kiss you, my favorite sonny, for ever and ever, really hard. Your father

Republished in the book “Perished Heroes Speak”. His biography from the book:

Grigory Tarasenko was born in 1910 in Dnepropetrovsk region. He became an orphan when he was 10. He had to earn a living himself. Thanks to the help of his comrades, as well as his own persistence and will, he managed to receive secondary education. He became a school teacher in Lyubimovka village of Zaporozhskaya region, Ukrainian Soviet Socialist Republic.

The Great Patriotic War disrupted the peaceful lives of the Soviet people. Just like thousands of patriots, Grigory Tarasenko went to defend his Homeland. He was heavily wounded when defending Rostov-on-Don. As soon as he regained his senses in the field hospital, he asked for a pencil and paper to write a letter to his son. Nurse A. V. Khudyakova gave this letter to his son.