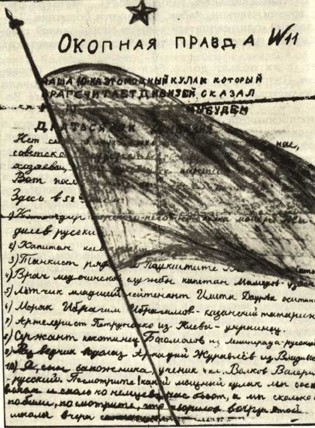 Our ten is a mighty fist, which is a whole division for the enemy and, as major Zhidelev said, we will fight like a division. There isn’t a force in the world which will defeat us, the Soviet state, because we are masters ourselves, we are led by the Communist party. Here, take a look at who we are. Here, in 52nd school:

Look what a powerful fist we are together and how many Germans try to kill us, and how many we have killed; look what was going on around this school yesterday, how many their dead are on the ground, and we, as a mighty fist, are alive and holding on, and they, bastards, think, there’s a thousand of us here and attack us by thousands. Ha-ha, cowards, they even leave their heavily wounded behind and flee. Oh, how I want to live and tell all of this after the victory. To everybody who will be studying in this school! 52nd school! Your walls are holding on, as a miracle among the ruins, your foundation is unshaken, just like our mighty fist of ten… Dear ten! Who of you will be left alive, tell everybody who will study in this school; wherever you are, come here and tell everything that happened here, in Sevastopol. I want to become a bird and fly over all of Sevastopol, over every house, every school, every street. There are such mighty fists, there are millions of them, we will never be defeated by bastards, Hitler and others. There are millions of us, look! From the Far East to Riga, from Caucasus to Kiev, from Sevastopol to Tashkent, there are millions of fists like ours, and we, like steel, are unbeatable!

Editor’s note: Valery Volkov was a member of the partisan movement in Sevastopol, Crimea. After fascists killed his father, he became the “son of the regiment” of the 7th marine brigade. Being only 13 years old, he participated in combat together with adults. In addition to actually fighting Nazis, he carried ammunition to soldiers and acquired recon information. According to his comrades in arms, he liked poetry and often recited Mayakovsky’s poems to them. He was the editor of the “Trench Truth” newspaper. The only issue to survive is 11th, the one above. Would anybody guess that those lines were written by a 13-year old?

On July 1, 1942, Valery heroically died repelling a Nazi attack by throwing a cluster of grenades under an enemy’s tank. His surviving comrades in arms, Ivan Petrunenko and Ilita Daurova preserved and gave the surviving 11th edition of “Trench Truth” to historians. On December 28, 1963, pioneer Valery Volkov was posthumously awarded with the Order of the Patriotic War First Class for courage and valor.