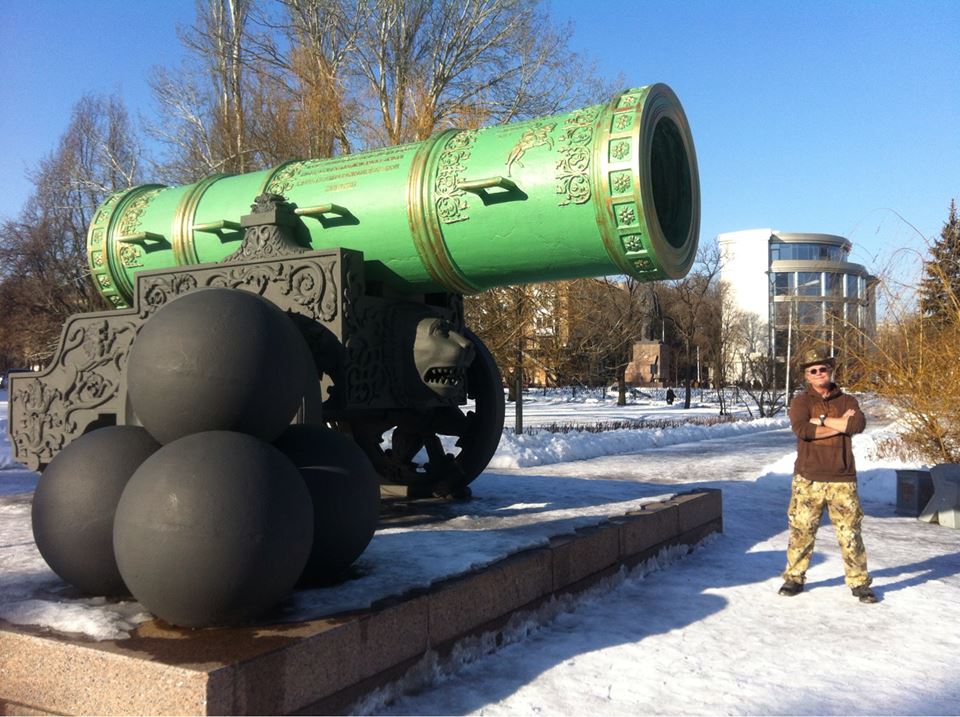 The author before 18th century gun in Donetsk. (All images by the author unless otherwise indicated.)

This is the second part of Texas’s diary  — the first part, covering his departure from the U.S., arrival in Moscow, visit to Volgograd (Stalingrad), travel to Rostov, crossing the border into Donbass and arrival in Donetsk can be found here (original publication can be found here).  Texas channels the Lincoln Brigade, Jack London and Ernest Hemingway — journalism as compelling literature in a hurry…

When I arrived in Donetsk on December 7th, 2014, I heard artillery fire within 5 minutes of getting off the bus. It was heavy — big guns and lots of shots, but it was several kilometers away, so no immediate danger where I was. But I knew enough to know somebody was getting hit hard, and not too far away. The people around me at the bus station didn’t seem to pay it any mind, so I acted like I didn’t either.  Welcome to Donetsk.

..
I caught a cab to the Red Cat Hostel on prospect Mira and was charged only twice the normal fare, which meant I paid about $5 instead of $2. I did not realize it at the time, nor would I have cared if I did. I got to the hostel and met Christian Malaparte, a journalist and war correspondent who was to become my guide and best friend in my early days in Donetsk.

..
Christian and I had corresponded before I left the States, and I was most fortunate to have him welcome me on my arrival. The Red Cat was a nice, clean place, and my bed there cost me about $3 a night. Though there were 15 beds in the Red Cat, there was just me, Christian and a strange young German guy who called himself Billy Six.

As we sat, drinking vodka, Christian gave me the rundown on the situation in Donetsk, and I gave him my first interview.  Though we were in a safe place (the Red Cat is on the ground floor of a tall building, surrounded by other tall buildings, virtually impossible to be hit by artillery) the steady artillery fire, like distant thunder, was a constant reminder I was not in Kansas anymore. I had an address that was purported to be the place to volunteer for the Novorossiyan Army, and Christian offered to take me there the next day. Texas in front of the Donetsk library—now shuttered.

..
So the next day, we got up early, early in the morning. Even though Christian had been in Donetsk for over half a year, it took us a while to find the place – a garage with a steel door guarded by two Partisans with mismatched camouflage and Kalashnikovs. When Christian asked (in his passable Russian) if this was the place for volunteers, the guards knocked on the door, an officer appeared and after a short consultation, said “Nyet.” They gave us another address, where we got identical treatment — another “Nyet” and another address, this time to the former SBU, the former Ukrainian State Police headquarters complex, which by fortunate coincidence was only a few hundred meters from the Red Cat. As we had spent most of the day running around from address to address, we decided we would talk to the guys at the SBU the following day, so we went back to the Cat, drank vodka, ate pelmeni and the next day got up early, early in the morning.
..

The SBU on Prospect Mira is an interesting and imposing place, and pretty much exactly like what you would expect the secret police headquarters of a former Soviet city to look like. A complex of several tall buildings, surrounded by a stone wall topped with razor wire, and only one small gate for entry or exit, guarded by soldiers with AKs and PKM machine guns. There were bullet and rocket holes on the exterior and interior of the building, remnants of the battle when the locals had wrested control of the complex from the cops who had thrown in with the new fascist regime in Kiev. There was a yellow and blue Ukrainian flag, used as a doormat at the entrance to the main building. We approached the guards, Christian explained I was there to volunteer, they checked my passport and said “Da”. But Christian was not allowed to enter, so I was on my own. Stepping across that threshold, I realized I was embarking on a new chapter in my life, something that would change me forever, for better or for worse. In the distance, artillery thundered.

The SBU is a perfect introduction to Novorossiyan military life. I was taken to a crowded room full of other volunteers, given a blanket and place to sleep on the floor, told lunch would be at 2 PM and told to wait. And so I waited. The lunch was very basic fare – soup and then kashka, a cracked wheat dish with just a hint of meat for flavoring. Then, back to the room to wait. Mid-afternoon, all volunteers were taken to another room for a lecture from a sergeant. As I sat there, among about 25 other volunteers, listening but not understanding a word, I wondered to myself how the hell I was actually going to pull this off. When the sergeant finished the lecture, I heard a guy in the back say “Javier, I will translate what the sergeant said into English for you in a minute.” I was in luck! I approached and said I would like a translation as well. The young English speaker looked at me and said “You’re not Russian?” I replied that I was from the States. “What state? he asked. “Texas” “Me too!” What city?” “Austin” “ME TOO!” We then embraced, to the applause of all volunteers. And that is how I met Toro (Javier’s nickname) and Orion.
..

Orion was born in Moscow, but moved with his family to Texas when he was 10. He had spent most of the next 20 years just down the road from where I lived in Austin. But in spite of our proximity in Texas, we had to come to the secret police headquarters in the hinterlands of the former Soviet Union to actually meet. Toro was an older guy, a romantic idealist from Spain, not so much a Communist, but a genuine anti-fascist who was willing to put his life on the line for what he believed in. As evening approached, I explained that the Red Cat was only a minute away, and nice accommodations were available for only a couple of bucks. So we retired to The Cat, to drink vodka, eat pelmeni and get up early, early in the morning… The Lenin Square in Donetsk. Statues of the great revolutionary are being defaced and desecrated all over Ukraine, especially in Kiev and Lviv, but not in Novorossiya, where the spirit of collective solidarity endures.

I used to be a weed smuggler, and one of the many useful things I learned from that vocation was patience. I would call my connections in South Texas, tell them I was coming with money and to have a load ready for me when I got there. Invariably, when I got there, the load was not there, but I was always told “They will cross the river tonight at midnight, so be ready early, early in the morning”. Sometimes this would go on for weeks. Though I don’t think there were any Mexicans in charge of the Donetsk SBU, they had perfected the same technique.  We would get up, yes, early, early in the morning, present ourselves at the SBU and be told to wait. The officer we needed to talk to would arrive before lunch. At lunch, we were told he would be there right after lunch, and then, right after dinner. Every night, around 8PM, we were told the officer would not be coming today, but to be ready tomorrow. Early, early in the morning…
..

On the third day, Orion, Toro and I were told we would be going for a special interview at the Military Intelligence offices. We were interviewed for hours by three agents – two clean cut super fit soldiers, Sergei and Ivan, and a third guy who did not introduce himself or speak. On his black shirt, in English, was emblazoned his name… “The Dragon”. The questioning went on for hours, and it seemed they were mostly asking questions of me, with Orion interpreting. At one point, Sergei drew his Makarov pistol, unloaded it and passed it to me to see if I knew how to disassemble it. In the moment between when he drew his gun and I understood why, I had a very lonely feeling of being in a very strange place, a long way from home. I disassembled and reassembled the Makarov, and then did the same with an AK. After several hours, it looked like we were going to pass the interrogation. The Dragon got up, walked across the room, and started making some tea. Then for the first time he spoke, and Orion translated The Dragon’s question – “Do you think the US government was involved in the attacks on 9/11?” I answered in the affirmative, saying only a fool could think otherwise. The Dragon did not smile, but he nodded. It was time for tea for all of us, I passed around my American Marlboros and then we were taken back to the SBU, where we were told we had passed the questioning and an officer would be by to meet us… Early early in the morning. Russell “Texas” Bentley is is an advocate of the victims of the Novorussiyan War, and war correspondent for many media outlets, especially for The Greanville Post, the online magazine“New Eastern Outlook”, and a select number of other leading political sites.

TEXAC CHRONICLE #6: THE RED CAT, THE DRAGON AND THE SBU