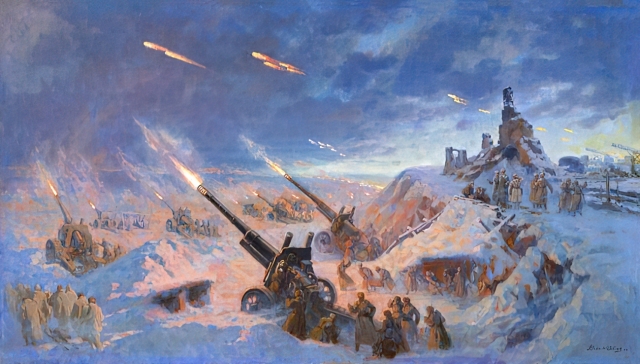 Artillery at Stalingrad by P. Sokolov-Skalja, 1946.

We publish a summary of events concerning the situation around Ukraine as of 7 p.m., January 23.

Deputy Chairman of the Russian Security Council Dmitry Medvedev, “The world has come close to the threat of World War III.”

Peskov said that Russian President Vladimir Putin’s decree on mobilization provides not only for the drafting of the required number of people, but also for other measures, so it remains in force.

Kremlin Press Secretary Peskov, “There are no conditions for negotiations [with Ukraine] at the moment, neither de facto nor de jure.”

The Russian side decided to downgrade the level of mutual diplomatic relations with Estonia to the level of the Chargé d’Affaires ad interim, and the Estonian Ambassador should leave Russia on February 7. This was announced by the Russian Foreign Ministry.

Brazil and Argentina will soon announce the start of work on creating a single currency, reported the Financial Times. Other Latin American countries will be invited to join the project.

Russia was forced to launch a special operation to denazify Ukraine because of NATO’s eastward expansion. Pierre de Gaulle, grandson of postwar French leader Charles de Gaulle, said this, the newspaper Le Figaro wrote. “The West has not fulfilled its obligations in terms of not expanding NATO to the East. How else could Moscow respond to reckless expansionism?” said a descendant of the leader of the French Resistance.

Zelensky said that the military leadership was tasked with creating reserves so that the defenders could recuperate after combat operations.

The decisive time in Ukraine’s war with Russia will be spring and early summer, as a major new Russian offensive is planned for that time. If the new offensive fails, it will be the downfall of Russian President Vladimir Putin and the entire Russian Federation, Deputy Chief of Ukraine’s Main Directorate of Intelligence told Delfi.

New military units are being created in Ukraine, which will be equipped with modern equipment. As Nayev, Commander of the Joint Forces the Armed Forces of Ukraine, told CNN, their combat readiness would determine further actions at the front and the possibility of advancing.

At the same time, he noted that the availability of modern equipment, in particular tanks, is important. These should not be old-style T-72 tanks, but more modern vehicles such as the German Leopard 2 and British Challenger. Nayev said that Ukraine needs a large number of Western tanks because they are much better than Soviet models and can help the Ukrainian armed units to advance.

Western countries and their supporters

Poland officially appealed to Germany on the issue of transferring Leopard-2 tanks to Ukraine.

Poland intends to start training the Ukrainian militants to operate Leopard 2 tanks in the next few days. The head of the International Policy Bureau in the Polish presidential office, Marcin Przydacz, announced.

German Defence Minister on supplying tanks to Ukraine, “There will be a decision soon.”

Omid Nuripour, co-chairman of the German the Alliance ’90/The Greens, called on the German government to expedite the decision to supply Leopard combat tanks to Ukraine, the Augsburger Allgemeine newspaper reported.

It is reported that Germany will finance the delivery of 500 Iveco ACL90 and VM90 trucks and Renault TRM2000 trucks to the Ukrainian armed units. The vehicles will be purchased from storage and will be used to equip the three corps being created.

Estonia is giving Ukraine all of its 155 mm howitzers, the Ukrainian General Staff said. It is about the FH-70 towed howitzers of joint British-German-Italian production, which were launched in 1978. Estonia has 24 FH-70 howitzers in service.

February 24, Latvia will lower the level of its diplomatic relations with Russia as a sign of solidarity with Estonia – Latvian Foreign Minister.

The Czech Republic will not send its soldiers to help the Baltic States and Poland if these countries are attacked, Czech presidential candidate and former Prime Minister Andrej Babiš said during a televised debate.

Italy is ready to supply Ukraine with the Samp/T air defense system in cooperation with France. Earlier it was said that a cheaper and simpler system, Aspide, would be sent to Ukraine.

Morocco sent Ukraine a batch of T-72B tanks. Since they were not in the best condition, notes the Algerian publication Menadefence, they are being repaired at the Excalibur company workshops in the Czech town of Sternberk. About 20 upgraded vehicles have already been sent to the battlefield. It is not specified how many tanks Morocco will provide.

People in Burkina Faso have broadly welcomed plans by the military government to oust French troops within a month – Africanews.

The French military-industrial complex accelerated the production of Caesar howitzers and Rafale fighters, said the head of the French Defense Ministry Sébastien Lecornu, the newspaper Usine Nouvelle wrote on January 23. “I can point out that Dassault, together with its partners Safran and Thales, have begun to produce more than three Rafale fighters a month instead of one. As for the Caesar howitzers, production rhythms also accelerated in 2022,” he noted.

US manufacturer Ford may face problems if it does not cancel its plans to cut thousands of jobs in Europe, the German union IG Metall said – Reuters.

Italy is not involved in the discussion of the possibility of supplying Leopard tanks to the Kiev regime, Foreign Minister Antonio Tajani said on January 23, according to the news agency ANSA. The minister explained that instead Rome together with Paris are working on the supply of air defense systems to Ukraine. “Italy together with France is dealing with the issue of supplying missile defense systems,” said Tajani.

The United States on Monday imposed sanctions on Iran’s Islamic Revolutionary Guard Corps (IRGC) Cooperative Foundation and senior Iranian officials. This move was taken in coordination with Britain and the European Union.