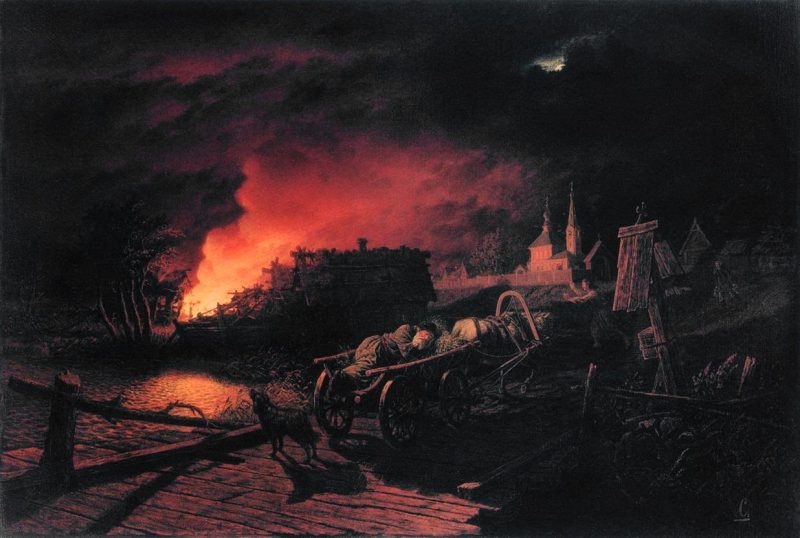 The fire in the village at night by Leonid Solomatkin,1867.

The Urengoy-Pomary-Uzhgorod pipeline is used exclusively to supply gas to Europe. It is the only entry point of Russian gas to Ukraine for gas supply to Europe today

The fire was visible from several kilometers away. Telegram channel Mash wrote that the temperature in the villages near the site of the explosion – between the village of Kalinino and the village of Yambakhtino – was so high that residents could not approach their homes.

The fire was quickly extinguished by the emergency services. The former Deputy Head of the Russian Ministry of Emergency Situations noted that the repair work on the gas pipeline could take up to three days. Now the damaged area has been identified and the pipeline has been shut off. Gas is supplied to Europe through alternative pipes.

The Urengoy – Pomary – Uzhgorod gas pipeline is used for gas supplies to Europe, for Chuvashia it is a transit gas pipeline. The pipeline branch goes to the EU via Ukraine and crosses the Russian-Ukrainian border at the Sudzha station in the Kursk region. It is currently the only entry point for Russian gas into Ukraine for transit to Europe.

The head of Chuvashia Oleg Nikolaev said that three people were killed and one injured in the gas pipeline fire. “The driver survived, he is now in a state of shock,” explained the head of the region.

Oleg Nikolaev wrote on his Telegram channel that all the killed and injured persons were employees of the Zavolzhsky Line Pipe Operation Department of Gazprom Transgaz Nizhny Novgorod, which is responsible for this gas pipeline.

Together with the company, the authorities will provide assistance to families who have lost relatives, he also noted.

“All emergency services went to the site to ensure the localization of the fire, not to allow the fire to go to residential houses, these tasks were paramount,” Nikolaev explained.

Mash reported that Sergey Nikolaev, Aleksandr Maksimov and Yuriy Ilyin were the Gazprom Transgaz Nizhny Novgorod employees, who died during the accident in Chuvashia. They arrived at the exploded gas pipeline yesterday from Krasnoarmeysk. Today they had to fill in the gas pipe between the villages of Kalinino and Shumerlya.

The channel also notes, “They could have finished their work as early as 1:30 p.m. But they decided to accomplish it. At 1:30 p.m., they got out of the KAMAZ, where they had slept overnight, to a section of the pipe and started filling it with gas. The truck driver, 36-year-old Yevgeny Dmitriev, first stood in the street with the workers but he went inside to get warm. That’s when the explosion happened.”

Causes of the incident

The Investigative Committee of the Russian Federation initiated a case of violation of industrial safety requirements at the site. According to investigators, around 1:44 p.m. gas leaked out during repair work on the main gas pipeline near the village of Yambakhtino that caused a fire.

Blogger Yuri Podolyaka suggested that there was sabotage at the Chuvashia section of the Urengoy-Uzhgorod gas pipeline and that the United States was behind it.

The Oil and Capital informational website, citing its sources, reported that two weeks ago, an Omsk construction company completed the repair of a section of the gas pipeline and that the work was accepted by the owner, Gazprom.

After the explosion in Chuvashia, gas prices in Europe increased rapidly, reaching $1260 per thousand cubic meters.

However, Aleksey Belogoriev, deputy director for energy at the Institute of Energy and Finance, believes that the accident should not significantly raise gas prices in Europe:

“At least, neither Russia nor Ukraine have reported any serious reductions in gas supplies in the near future. The damaged section can be bypassed in case of necessity; Gazprom has a rather extensive system of gas pipelines. […]

Regarding your question about how the complete stop of gas transit through Ukraine will affect the EU gas market, I note that this will increase nervousness in the market, so prices will rise, although not radically. In addition, everything will depend on the extent of gas supply reduction.”