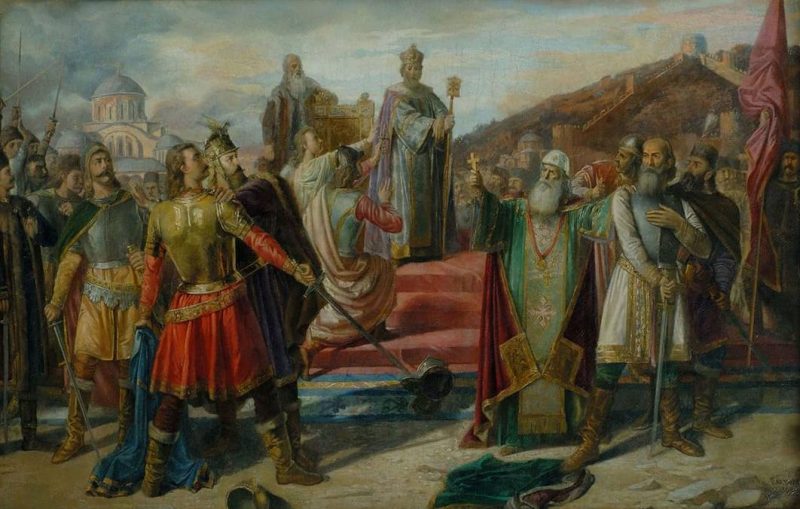 Coronation in Prizren before the Battle of Kosovo in 1389 by Stevan Todorovic, 1899.

Oppressed by Kosovo authorities and the Albanian population, Serbs in Kosovo and Metohija once again took to the streets and erected barricades on the roads

Another escalation, triggered by the decision of the Kosovo authorities to punish Serbs for the license plates issued in Serbia, has gone into the phase of open confrontation. Although in the negotiations in Brussels, the issue of the reregistration of vehicles was postponed, and the elections in the four northern municipalities of Kosovo and Metohija, following the decision of the President of this unrecognized republic Vjosa Osmani were also postponed until spring 2023, the situation has deteriorated significantly.

On December 9, 200 to 300 Kosovo Police Special Forces were deployed in northern Kosovo and Metohija. The unit had armored vehicles in addition to weapons. And while the politicians were accusing each other of failing to fulfill the assumed obligations, on December 10, the Kosovo Serbs began to build barricades on the main roads and border crossings. The formal occasion was the detention of former Kosovo Serb police officer Dejan Pantic at the Jarinje border crossing.

It should be noted that all top Serbian officials are doing their best to maintain peaceful rhetoric, although they hint that acts of violence against Serbs by the Kosovars will not go unpunished. Both Serbian President Aleksandar Vucic and Prime Minister Ana Brnabic have repeatedly appealed to the international community to ensure the safety of the Serbian population in Kosovo and Metohija. For example, Vucic stated, “This year is a record year for ethnic attacks, 131 more than last year. The Kurti government is a champion in this.”

The request was prepared and sent to KFOR, but as expected, the representatives of NATO and the EU were satisfied with this initiative of Serbia. And, as was to be expected, no one gave permission to deploy Serbian forces. However, such issues are not resolved in a few hours.

Against the background of various political speeches, the real situation in Kosovo and Metohija continued to escalate. On the evening of December 10, shots were heard in the vicinity of Zubin Potok, and two explosions were heard in Zvecanje, near Kosovska Mitrovica. Although no injuries were reported, it only exacerbated the situation.

The morning of December 11 did not improve the situation at all, and already the Kosovo authorities accused the Serbs of attacking the police patrols, which were forced to confront the perpetrators with gunfire.

“Members of certain criminal groups, who were blocking several routes in the north, shot at police patrols on three occasions while they were on duty in the area of Lake Gazivode, on their way to the Brnjak checkpoint,” the Kosovo police said in an official report.

It is impossible to check whether this is true or not, but what is certain is that the situation has become even more tense because of these activities and reports.

The Serbs, by the way, also accused Kosovo Police Special Forces of seizing a large dam on the Gazivod Lake, where the brave Kosovo police found a guard, who was thrown out of the territory of the hydroelectric facility. “Kosovo Police Special Forces special unit fighters in armored vehicles and fully armed invaded the territory of the dam on Lake Gazivode and removed and tore Serbian flags from the building,” the Serbian media noted. According to the Serbian side, police special forces entrenched at the hydroelectric facility, but the Kosovo side denies the seizure.

According to the President of Serbia, the situation in Kosovo is at boiling point: the Serbs who have built barricades will not leave them, because they don’t want to endure oppression by Kosovo authorities and the Albanian population.

The Kosovar authorities represented by Prime Minister Albin Kurti are not going to reconcile either and demand the dismantling of the barricades.

As for the EU, which Aleksandar Vucic is so passionately appealing to, EU politicians are, as usual, calling on the sides to calm down, praising the president of Kosovo for postponing elections in four northern municipalities and threatening, through EU High Representative for Foreign Affairs and Security Policy Josep Borrell, those who would presume to attack the  European Union Rule of Law Mission in Kosovo [EULEX].

“The EU will not tolerate attacks on the EULEX mission in Kosovo or the use of violent, criminal actions in the north,” he said.

Serbian Prime Minister Ana Brnabich accused the EU of inaction. In her opinion, Kurti’s policy has brought Serbia to the brink of war.

Russian Foreign Ministry spokeswoman Maria Zakharova responded to Brnabich’s statement, saying the situation in Kosovo was precisely created by the EU policy in the Balkans. “Well, why ‘inaction.’ This is exactly the situation that the EU has essentially been creating for years,” she said.

Kosovo’s prime minister, according to Serbian media reports, has gathered security forces to discuss next steps in northern Kosovo and Metohija. The Serbian president has also called a meeting of the National Security Council to work out a response.

It is not yet clear how events will develop, but some analysts believe that a hot phase of the conflict is possible. So, the head of the Center for the Study of the Modern Balkan crisis of the Institute of Slavic Studies of the Russian Academy of Science Yelena Guskova believes that the situation in Kosovo and Metohija might develop into an armed conflict even before the new year if the international community does not interfere.

“Now it is extremely important to prevent an armed clash: both the Serbian army is ready, and those NATO people who are inside Kosovo are ready, although they do not interfere in the situation. But we must not forget that the Albanian police have already grown stronger over the years and have actually turned into an army. This too can seriously aggravate the situation and lead to clashes,” she said.

So far, the situation is unclear, and it’s impossible to say for sure what will happen tomorrow or even tonight. But experience from similar situations in the past has shown that the Serbs can once again retreat while trying to save face.