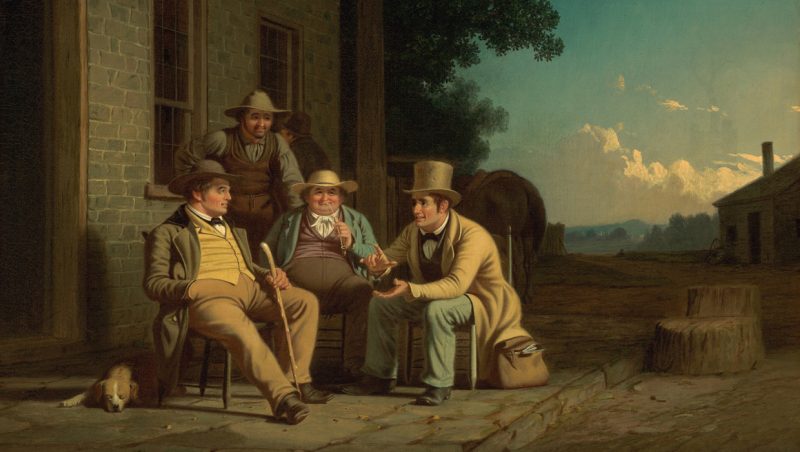 Canvassing for a Vote by George Caleb Bingham. 1852.

The core of the conflict in Germany over the special fund for the Bundeswehr is the purpose for which these funds can be used.

Earlier, German Chancellor Olaf Scholz expressed confidence that he could reach an agreement with the opposition bloc CDU/CSU in the Bundestag on the establishment of a special fund of 100 billion euros for the re-equipment of the Bundeswehr. In fact, Scholz wagered on patriotic cooperation with the opposition CDU party.

At the same time, CDU party chairman Friedrich Merz stated that they are ready to vote for a corresponding amendment to the Basic Law before the summer.

Chancellor Scholz stated that this is about re-equipping the Bundeswehr and increasing its fighting ability.

However, the Greens introduced wording in the original version of the bill which allows the money to be used to help the allies. In this case, if the Federal Republic of Germany concludes an interstate agreement with Ukraine for the supply of weapons, they could theoretically be financed from a special fund of the Bundeswehr.

At the same time, the CDU demands that the coalition stick to what the chancellor has promised. That is, to limit the use of the special fund to the German army. But the Greens continue to insist, and the Chancellor is traditionally silent.

All this gives the impression of serious disagreements within the government coalition.

Most likely, a decision on the special fund for the Bundeswehr will be approved in one way or another by the end of May, and the budget of the German army will be increased to 2% of GDP. However, after that the probability of collapse of the government coalition in Germany will increase, because the joint positive agenda of the SPD, the Greens, and the FDP parties will be exhausted.

At the same time, the number and intensity of conflicts within the coalition, such as delays in supplying heavy weapons to Ukraine, will only increase. The confusing and uncertain political style of Chancellor Scholz and the SPD as a whole loses heavily to the largely radical but clear position of the Greens.

It is this style that the second-largest opposition bloc in the Bundestag, the CDU/CSU led by Friedrich Merz, is trying to adjust to in the hope of taking the federal chancellor’s chair.

Recall that in his speech in the Bundestag at the end of February 2022 German Chancellor Olaf Scholz announced the turning point in the post-war history of the country and offered to establish a special fund of 100 billion euros for re-equipment of the German army. Funding for the fund must come entirely from loans, which requires a change in the Basic Law of Germany due to existing legal restrictions.

Amendments to the constitution can be introduced by an absolute two-thirds majority of both the Bundestag and the Bundesrat, for which the government coalition will need the consent of the largest opposition faction CDU/CSU.