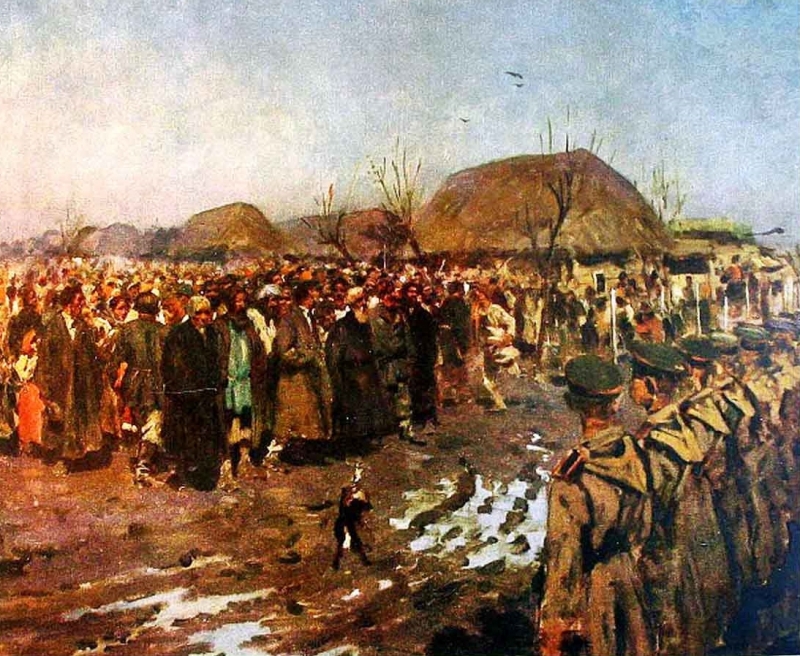 Revolt in the village by Sergey Ivanov, 1889.

Communication between the authorities with the conservative population of Russia is being deliberately broken by those who crudely and insultingly push for forced vaccination, said political scientist, philosopher and the leader of the Essence of Time movement Sergey Kurginyan in “The Meaning of the Game” broadcast published on December 12 on YouTube.

On the coronavirus vaccination issue, numerous media use such a way to address the people that would never lead to a response, Kurginyan stressed.

“And when he wants to get through to the people he is addressing, when he needs these people, when he does not disregard them, does not feel contempt for them, then he may shout, ‘You must understand!’ And if people believe that he needs them to understand they will respond,” the philosopher stressed.

However, the aggressive, disrespectful presentation of information on vaccination in the media full of blatant insults towards the citizens, spoken out with disfigured faces, is disgusting to the majority of the Russian people, Kurginyan said. At the same time, the political scientist believes, the media speakers are mainly professional, talented people capable of speaking persuasively. Otherwise, they would have never maintained on the air, he explained.

“Where has it all gone? Indeed, we are watching something anti-persuasive. We are watching an unnatural over-tension, which is not going from inside and which is not associated with an effort to get through to people whatever it takes,” this is how Kurginyan explained what is happening. He wondered what the reason for such a mysterious unprofessionalism of highly professional people is.

“By acting this way, you are deliberately breaking communication with a very large, so to say, electoral domain, and a part of your population in general. You are permanently breaking this communication, do you understand this?” the political scientist asked.

“You believe it is one third of the population. You know this is not true. But well, let it be one third. Why break communication with it when it is the conservative, largely religious third, which is extremely important for the coming elections?” the leader of Essence of Time wonders.

Kurginyan explained that those who promote forced vaccination act in a way as if their goal was not to persuade people into vaccination but to initiate a revolt.

In his previous broadcasts and articles Sergey Kurginyan repeatedly stressed that he consistently opposed forced vaccination for the coronavirus, and that he was not an opponent to vaccines per se.