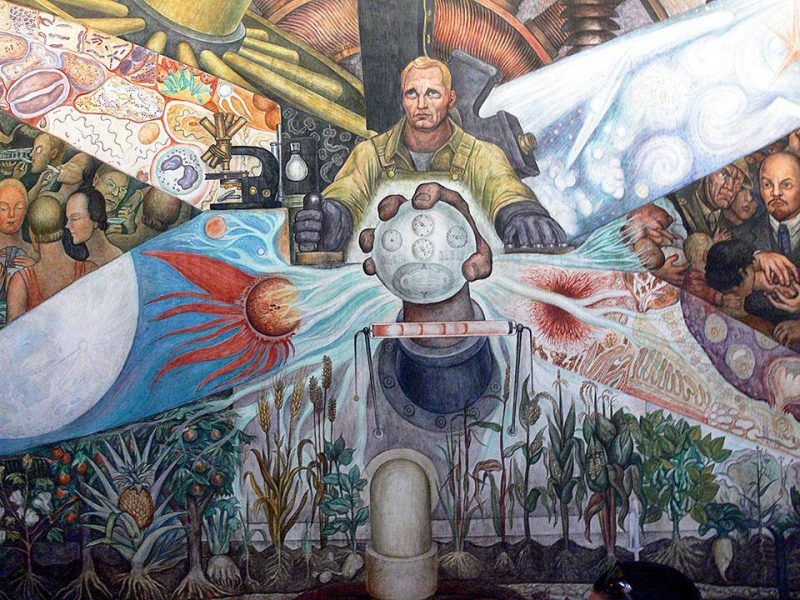 Man At The Crossroads by Diego Rivera (a fragment), 1934

Faith in the possibility of a human ascent allows one to overcome the idea that Man is a beast gifted with reason, said political scientist, the leader of the Essence of Time movement Sergey Kurginyan on December 22 in his program The Meaning of the Game.

“The idea that Man is capable for transformation gives hope to a possibility that this beast within would not destroy humanity, and moreover, is the pinnacle of creation, salvation, and bears infinite prospects for humanity,” stressed Sergey Kurginyan. – “Such a transformation can be carried out not only by the hands of God, but it can be carried out by the hands of Man, and such Man is capable of ascending here on Earth.”

At the same time, the political scientist drew his attention to the parallels in the vision of such an ascension among secular and religious people. “For a religious person, such a transformation takes place as ‘an ascension to God’; for a secular person – it’s an ascension to the new Man, a Man with a capital letter M, and so forth.”

And consequently, this transformed Man will be able to create a new world where “not only a good social environment will be built, but there will also be special opportunities for human ascension that encourage the unchaining and awakening of higher creative potentials, towards reaching infinite destiny, to endless, cosmic possibilities.”

Exactly this idea was a truly communist, or Marxist idea, stressed the political scientist. He explained why initially, at the earlier stage of the communist movement, this idea could not be spelled out in its entirety.

“Marx could not assign a decisive importance to this idea during an era when the barbaric exploitation of people by people had to be in the forefront, when starving children died in the slums, when people lived in atrocious conditions that would simply not allow them to become human,” said Kurginyan. “Of course, in this regard, Marx’s, Lenin’s and others’ attention to exploitation was justified.”

However, Marx never reduced everything to it, he viewed the true goal of communism as an overcoming of alienation from the human essence, recalled the political scientist.

In this regard, religious and secular people have something to agree on, concludes Sergey Kurginyan.